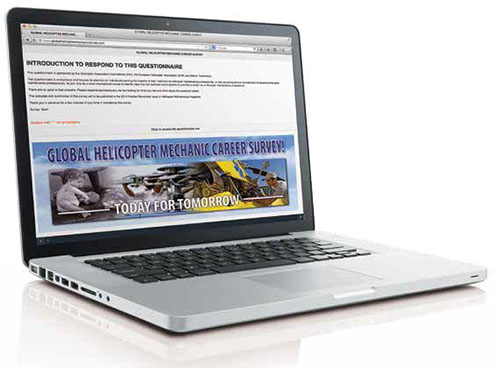 It began at HELI-EXPO 2013 in Las Vegas. Safran Turbomeca was holding a symposium on “The Shortage of A&P/AME Mechanics in the Workplace.” The symposium had representatives from Safran, Pratt & Whitney Canada, Eurocopter, Agusta Westland, Bell, Sikorsky, Air Methods, Bristow, Honeywell, GE, Total and Petrobras, to name a few. It was an impressive get together and there was a tremendous amount of expertise and time served in the helicopter industry represented. What we found to be most interesting was a fact that for most of us who work or have worked for helicopter companies in the U.S. have known for awhile, that we were encountering a shortage of A&P mechanics … but we are not alone. The problem is a global one and the symposium brought that to light in very definitive terms.

We wrote an article about that symposium in our December 2013 issue. Shortly thereafter, I was contacted by Jean-Louis Mostajo, corporate training director for Safran Turbomeca. He wanted to do another symposium at Heli-Expo 2014, and asked if Helicopter Maintenance magazine would be willing to provide the moderator. After reviewing what was needed to be done and the timeline available, we suggested to him that we did not think we had enough lead time to do it right. We suggested that instead, we do a questionnaire and use the results of the questionnaire as a basis for a new symposium that could be held at HELI-EXOI 2015 in Orlando, FL. So the journey began.

In what amounted to just a few short weeks, the staff at Turbomeca France and Helicopter Maintenance magazine put together a questionnaire we thought would work. The goal was to have those A&Ps/AMEs already working in the helicopter industry and those contemplating becoming A&Ps/AMEs to share their thoughts about the industry. What could we do to attract and keep more young people as many of the older generation retired? We wanted their opinion, and we still do.

Through the efforts of Turbomeca USA in Grand Prairie, TX, the card was printed and available throughout HELI-EXPO 2014. The survey Web site is: www.globalhelicoptermechanicsurvey.com. Soon there will be links available to the Web site from www.rotor.com; www.helicoptermaintenancemagazine.com; www.turbomeca.comand www.turbomeca-usa.com.

The survey will be available until sometime in June and then that Web site will close. Turbomeca will then total the results of the survey and pass them on to Helicopter Maintenance magazine so that we can write an article about the survey’s results. That article will run in the October/November 2014 issue of Helicopter Maintenance magazine. The survey results will act as the core for the symposium at Heli-Expo 2015 in Orlando, FL. The invited attendees will be sent the results in advance of the symposium and will share their views on what they think can be done in response to the survey’s results.

This is a beginning, a step in the right direction to a problem that is global in scope. We at Helicopter Maintenance magazine truly believe that the best minds and abilities to solve this problem can be found within the helicopter industry itself. Your opinion counts. We want to know your thoughts on this very important issue. The survey is anonymous; you do not have to give your name or the name of the company you work for. Please help. Tell us your thoughts on this important issue and spread the word. Tell others you know who work as A&Ps/AMEs and those in school to become one of us. Please take the survey — five minutes of your time will make a difference.

Thanks in advance for your support.