In the northern part of Virginia lies the city and county of Fairfax. Both get their name from Thomas Fairfax, the sixth Lord Fairfax of Cameron, who in 1649 was awarded five million acres of land by England’s King Charles. The town was established as the Town of Providence by an act of the state legislature in 1805. It was officially renamed the Town of Fairfax in 1874, and became an independent city in 1961. (So ends the history lesson for today.)

Fairfax County, VA, is a largely urban area covering some 435 square miles. It’s home to more than 1.2 million people and is a center for high-tech and government-related businesses. It’s also the home of the helicopter division of the Fairfax County Police Department’s (FCPD).

On July 1, 1940, the FCPD was established with six officers. Now 72 years later, with approximately 1,400 sworn officers among its ranks, the FCPD has the distinction of being the largest local law enforcement agency in the Commonwealth of Virginia.

Initially, this was a part-time operation based with Page Avjet at IAD (Dulles, Washington, D.C.) The division relocated to its present site in Fairfax, VA, in 1985. In 1990, the division decided to hire two civilian (non-sworn officer) A&P technicians to perform on-site maintenance. The division started out with two Bell 206B3 helicopters. From there they progressed to two Bell Long Rangers, then to Bell 407s, and today they are the world’s first law enforcement operator to use the Bell 429 light twin helicopter. 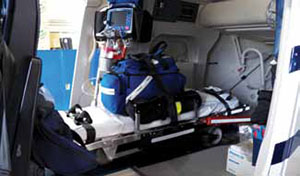 FCPD’s helicopter division flies as a FAR Part 91 operation. The division supports patrol officers on the ground as they investigate various crimes. They also help to locate missing persons, and participate in Medevac operations as requested. Helicopter division members also train regularly with tactical teams in case its support is called upon.

As with most police departments operating helicopters, there is a vast array of what I refer to as “special mission equipment” that has to be maintained. I spoke with Del Richardson, FCPD’s helicopter division DOM about this. He informed me that FCPD has been a leader in utilizing airborne law enforcement technology, starting with deploying one of the first civilian applications of infrared technology in the early 1980s. Since then, the helicopter division has employed significant upgrades, and is currently utilizing the state-of-the-art Wescam MX-10 stabilized infrared, low-light and daytime video sensor. This system, working in concert with an Aero Computers digital mapping system, enables the flightcrew to locate and track suspects on the ground day or night, with up to several miles of stand off. The system’s acuity and stability allows crews to read license plates and even name tags of police officers from altitudes of 1,000 feet AGL and distances of up to one half mile. The digital mapping system detail allows precision turret positioning and enables the crews to accurately determine target positions even in an orbiting helicopter being buffeted by turbulence. Night vision instrument system goggles and an advanced technology Trakka A-800 searchlight system work together to enhance safety and enables covert illumination of suspects and situations on the ground. There is regularly scheduled maintenance performed on the mounts of the external equipment; however, the overall impact on the maintenance department is minimal.

The helicopter division does not operate as a repair station and performs all work in house with the exception of major component overhauls such as engines, which are sent back to Pratt & Whitney. Some avionics work is also outsourced. All of the maintenance work done in house is under FAR Part 43.

Currently there are only two persons in the maintenance department. Richardson says that “being only two affords us the ability to learn and become well versed at everything. Quality assurance procedures are in place for any maintenance interventions from simply adding oil to a major component overhaul. As a team, we continually work together, verify work performed and pride ourselves on timeliness and accuracy.” By staggering the hours of the day and days of the week and alternating weekly who is on call, Richardson and his mechanic, Jeff Young, manage to provide the maintenance support required for 24/7 operations.

Even though the helicopters operate in an urban area away from extreme climates like the Arizona desert, staff members of the helicopter division believe firmly in the use of engine inlet barrier filters. Richardson says, “they are another tool that helps minimize contaminants from fouling the engines and causing costly repairs and down time.”

A typical day begins with the review of the helicopters’ status, and that progresses to the repair of any squawks that need to be addressed. Parts and tools inventory may also be performed, depending on the helicopters’ activity. 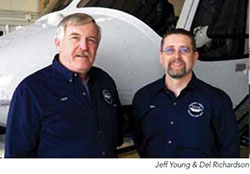 With a two-man maintenance crew and 24/7 flight operations to support, planning ahead and being prepared cannot be stressed enough. The helicopter division averages about 100 flight hours per month. In a typical 30-day period, this comes out to be at a minimum one 50-hour inspection and possibly two. Add to that the possibility of a 100-, 200-, 400- or 800 -hour inspection, and things can get busy in a hurry.

Richardson told me that “we start each maintenance function weeks in advance by ensuring parts, tools and consumables are on hand to perform the function. The procedure is communicated to operations and coordinated for minimal impact on the division’s mission. Then on the day of the function, we officially ground the aircraft and change its status to not airworthy. Once the work is complete, the paperwork is signed off and a return-to-service quality assurance function is coordinated with flight operations or another maintenance technician.” 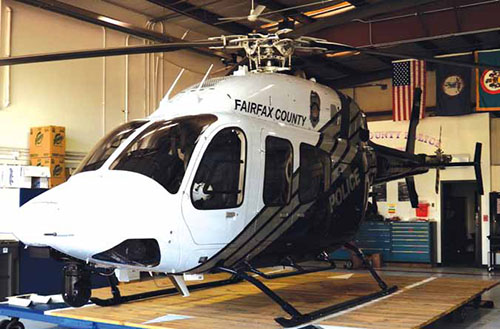 With the two Bell 429s being too new for any appreciable maintenance to have been performed, I asked Richardson what he considered to be the most labor-intensive and time-consuming maintenance tasks he has had to deal with in the past. “On the Bell 407 aircraft, this would probably be the main rotor track and balance,” he said. “These events were somewhat unpredictable on the Bell 407, but we have been told that the Bell 429’s rotor is very stable and easy to track and balance.”

I asked Richardson if he had any maintenance tips he cared to share with our readers that he found over time helped improve the maintenance process. “A clean work environment is critical,” he shared. “This includes the aircraft, shop and tools. Organized parts and tools are next, and always keep up with your paperwork.” Safety is also a prime concern with the helicopter division and they have actively been following a safety management system since 2010. It has applicability across the board, from flight operations to maintenance. Safety knows no bounds and should be everyone’s concern.

Lastly, I asked Richardson what skill sets he would look for most if he were looking to hire a new mechanic. “Personality and work ethic is foremost, followed by education, experience and ability.” he said. “Our maintenance organization is small and it is critical that we are able to blend and work together as a team. It is imperative that the maintenance team fosters trust and firm relationships with other organizations outside of the helicopter division, such as our third-party maintenance providers and equipment vendors.”

The FCPD’s helicopter division is on the job 24/7, providing aerial support to “protect persons and property by providing public safety services, and the fair and impartial enforcement of the laws of the Commonwealth of Virginia in the County of Fairfax, while promoting community involvement, as well as stability and order through service, assistance and visibility.”