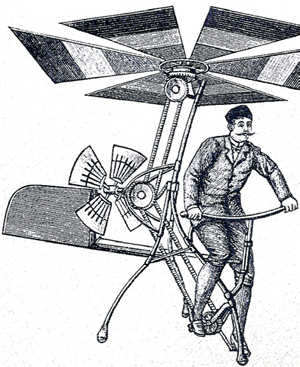 This whimsical drawing of an aeronaut supposedly providing lift with pedal-power in 1877 is from a museum archives in Germany. It is reproduced from “The Epic of Flight — The Helicopters.”

The earliest concepts of manned flight were based upon the notion that, once up in the air, like a bird, humans could take off in one place and land in another. At the same time, there were dreamers content with going straight up, with no particular place to go except straight down again. The modern helicopter traces its heritage to inventors possessed with tenacity, courage, scientific and practical knowledge, and in some cases, financial backing. Yet between 1903 and WWI, fixed-wing aeroplanes were literally flying circles around vertical flight contraptions that remained stuck to the ground. Dozens — perhaps hundreds — of models, test rigs and full-scale aircraft were built by engineers, tinkerers and hobbyists from Europe, the U.S. and Russia, but none resulted in a successful man-carrying vertical flying machine.

The Lexicon of Aviation History

An ornothoptor attempts to simulate bird flight with flapping “wings” but has never been a successful large scale aeroplane or helicopter. An auto-gyro is an airplane with an overhead rotor and is not a true helicopter. As the airplane engine plows through the air, the blades above are moved by the wind and “autorotate.” Juan de la Cierva of Spain first achieved the successful combination of an aircraft with an engine and rotors during the 1920s.

Just a year after Columbus’s discovery of the New World in 1492, his countryman, Leonardo DaVinci, drew sketches and made models of flying machines. Without sufficient mechanical power, he knew that his aircraft could not fly, but he inspired many to explore factors such as weight ratios of machine and man and address problems with lift and stability.

The term helicopter traces its lineage back five centuries to DaVinci’s model of an “airscrew,” a round platform upon which the pilot moved criss-crossing spiral wings using foot power, although he later made models using a spring motor. He described his design as a linen-covered helix (from the Greek word heliko, meaning “spiral.”) In the 1880s, a French inventor scrambled another Greek word (pteron,  meaning “wing”) together with heliko, which became helicoptere, or helicopter. 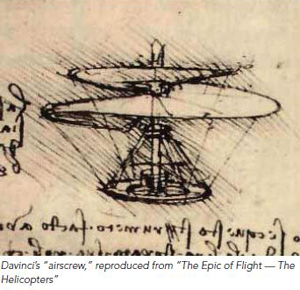 “Inventors struggled to develop a workable helicopter but they all lacked a suitable engine, a light-weight source that was strong enough to lift a man-carrying machine into the air.” — Warren R. Young, Epic of Flight, 1982

Although pre-history is defined as a time before man created writing, helicopter historian Frank DeLear once described the 1800s as the “pre-historic era of helicopters.” Indeed, some of the wood, fabric and metal contraptions designed and/or tested for vertical flight defied the laws of physics and resembled a clumsy, heavy dinosaur. Undeterred dreamers proposed daring schemes which now seem naïve, if not dangerous. Women of the nineteenth century must have had “up-lifting” ideas but none appear to have applied them to the design of a helicopter. However, men — principally from England, France and the U.S. — offered dozens of far-fetched design schemes during the 1800s.

In the 1860s, an aeronautical exhibition at London’s Crystal Palace displayed balloons and fanciful non-flying machines, including a small model helicopter. Across the Atlantic, helicopter design had also intrigued several American inventors.

Mortimer Nelson of New York is considered the first to file a U.S. patent for a helicopter which he called an “aerial car” in 1861. With rotors attached to a balloon, Nelson’s idea seemed feasible except for lack of a power source. Unable to create an alternative to the heavy steam engine, Nelson’s aerial car remained permanently parked.

During the American Civil War, inventors Luther C. Crowell (New York) and Captain William C. Powers (Confederate Army) envisioned the first military applications of the helicopter. Both inventions required a steam engine, but neither concept went past the model stage. In 1880, the challenge of a manned-vertical flying machine was taken on by none other than Thomas A. Edison. With $1,000 granted from aviation enthusiast Gordon Bennett, Edison built a model machine that he tested himself with near fatal results. Both Edison and Bennett lost interest thereafter.

After Edison’s experiments, not much upward progress was made until 30 years later. In 1903, Englishman George Clout created a machine which consisted of a spidery metal frame with a circular rail above the engine. Lift was to have occurred as two 30-foot wings spun overhead. It was described by one historian as resembling “nothing so much as an enormous butterfly” which never flew.

That same year, helicopter designs were eclipsed when Orville and Wilbur Wright made their first successful fixed-wing flights at Kitty Hawk, N.C. Nevertheless, between 1907 and 1908, Frenchman Louis Breguet invented a “gyroplane” which he tested tethered to the ground. Although not controlled, it briefly rose a few feet off the ground, which was probably the first time man and machine experienced hovering. During the same time, Paul Cornu, another French inventor, gained wide-spread fame for the “first flight” in a helicopter. Unchallenged for decades, the validity of Cornu’s “first flight” was extensively analyzed in 2007 by two engineers from the Glenn L. Martin Institute of Technology in Maryland. They decided newspaper reporters had exaggerated the “success” for a public eager to believe it. J. Gordon Leishman and Bradley Johnson studied Cornu’s patent drawings, photographs and a translation of Cornu’s logbook. They concluded that the machine most likely made “uncontrolled bouncing hops into the air,” probably aided by gusts of wind and “technically could not have made a sustained free flight in 1907.” Still, they acknowledge that Cornu made valuable contributions with controlled experiments, including an un-manned free-flying test rig carrying a sand bag, which could both hover and fly forward.

During the European 2007 “Centennial of Helicopter Flight,” Guillaume Bulin of Toulouse, France, built a full scale replica for museum display. Once it was built, Bulin, also an engineer, prudently decided against a test flight. 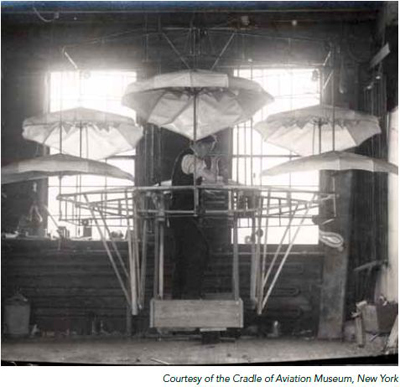 Recently, the construction drawings and photographs of completed flying machines built by heretofore unknown inventor, George F. Myers [1865-1961], were discovered in New York. Myers’ first ornothopter resembles five umbrellas above a steel cage for the pilot. Myers designed several aircraft between 1900 and 1939, but none flew.

Men and women in love with helicopters have created uses for it that even DaVinci could not have imagined. We now take for granted the helicopter’s unique abilities applied to law enforcement, media, rescue, security, military and recreation. Igor Sikorsky’s son Sergei is now 85 years old. After a career in the U.S. Coast Guard, he went into business and retired from Sikorsky Aircraft during the 1990s while he was Vice President. Sergei once wrote that, “My father was proudest of the many lives that the helicopter has saved. In many cases, no other kind of vehicle ever invented by man could have accomplished the life-saving missions.”

Now that is a concept DaVinci would understand. He wrote that, should his “spiral” aircraft be flown by man, the pilot must fly over water for a safer, less deadly landing. It led to another of his advanced ideas – the parachute.

Giacinta Bradley Koontz (“Gia”) is an aviation historian, magazine columnist and author. In 2008, she was awarded the National DAR History Medal and has appeared in documentaries on PBS and The History Channel. Learn more about her aviation history projects at www.harrietquimby.org.