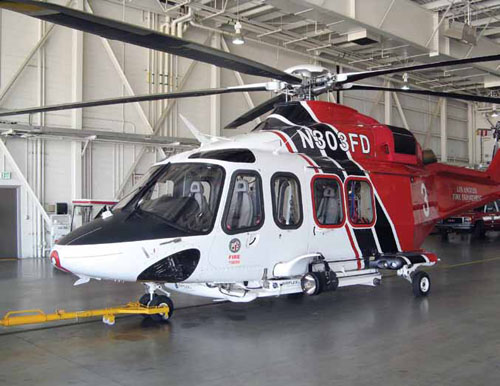 Los Angeles is home to 3.8 million people and encompasses 465 miles of terrain that is as varied as is its population. From a modern, sophisticated urban center with more traffic than residents can deal with, to rugged hillside areas and occasionally raging storm channels, this is the arena that more times than not the City of Los Angeles Fire Department’s Air Ops Division is called to work in. A hiker falls and sprains their ankle, a brushfire is noticed in the hills, a child falls into a storm channel. In all these scenarios, it is very plausible that one of the Air Support Division’s helicopters will be called to the scene.

The Los Angeles Fire Department’s Air Support Division has been in operation since 1962. Starting out with one piston engine Bell 47 helicopter, today they operate a fleet of six aircraft that include two Agusta AW139s, two Bell 412EPs, one Bell 412SP and one Bell 206L3. Primary missions are firefighting, EMS and search and hoist rescue in diverse terrain. Southern California’s coastal mountain areas range from sea level to 7,000 feet and offshore rescue responsibilities span from Malibu to San Pedro and Catalina Islands.

I asked Rick Wheeler, LAFD’s Chief Pilot, what led to the decision to install engine inlet barrier filters on the AW139s, their newest aircraft.

“The decision was made to prevent FOD damage,” said Wheeler. “Our missions often require us to use unimproved/off airport landing sites.”

Having recently visited LA’s General Services Department’s excellent helicopter maintenance facility, I learned that the installation of the inlet barrier filters was accomplished in-house by Allan Rogers and Julio Alecio, two of their helicopter mechanics. 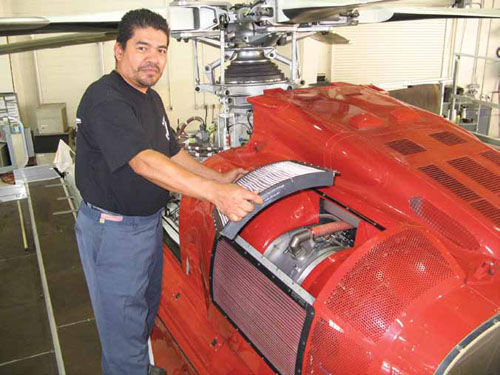 I asked Allan if there were any lessons learned on the installation he would like to share with our readers.

“It is always important to keep in mind that obstacles are frequently encountered when doing STC installs,” said Rogers. “Initial installs such as with the barrier filters on our AW139s pose additional challenges. Large manufacturing tolerances on some parts can lead to interference and fitting issues not encountered by future installers. I believe the AW139 engine cowlings have an approximately 0.250-inch tolerance, and this made trimming and fitting the compound curve barrier filter frame a challenge.

“Contacting the manufacturer of the STC usually has things back on track quickly when a deviation is necessary. Previously installed equipment, in this case an intake screen or particle separator may also affect the ease and or choice of installation. One thing that might not be as obvious is the willingness of STC and OEM manufacturers to listen to advice aimed at making an easier or better installation. To their credit, Aerospace Filtration Systems Inc. came to the LA City hangar and talked with us, soliciting our opinions and input.”

For those of you who are not familiar with the purpose of engine inlet barrier filters, here it is, in Rogers’ own words:

“The intent of the barrier filters is not to improve performance. Their purpose is to extend the life of the components in the gas path, and prevent FOD. To this end, they have been very effective so far. On a side note, the pilots have reported no degradation of engine performance as is sometimes the case with other types of engine inlet protection.”

Last but not least is the question of what type of maintenance is performed on the filters and how often. The answer may surprise you. Inspection and functional testing for condition, security and operation of the barrier system is carried out at the 300-hour/annual intervals, depending on the particular component. The filters are cleaned OC (on condition) up to the 300-hour/one-year time in service limit for cleaning. The filters can be cleaned a total of fifteen times, after which they are retired. 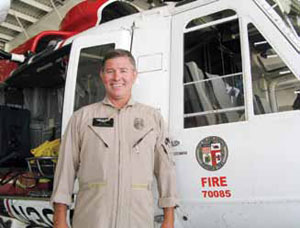 Rick Wheeler started his aviation career driving a fuel truck at Santa Monica airport in California, trading hours worked for flight instruction. He earned his commercial pilots certificate in 1975 and went to work in El Mirage CA as a Glider tow pilot. In 1978 He was hired by the LAFD as a firefighter. On his off duty time he started flying helicopters, got his flight instructor certificate and worked for various helicopter commercial operators in the Van Nuys area. Rick has been flying helicopters with the LAFD since 1982, working with helicopters in firefighting, EMS, hoist rescue and as a firefighter/Pilot flight instructor. 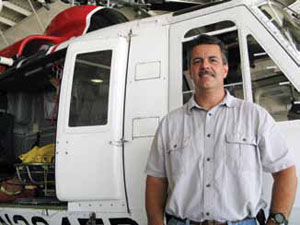 Allan Rogers started his aviation career as an aero engine mechanic with the Canadian Armed Forces; where he spent 10 years working on such varied aircraft as the beechcraft Musketeer, Bell 206B2, F104 Starfighter and CF18 Hornet. After moving to California and obtaining his A&P license he did a brief stint with Mc Donald Douglas working on MD11’s before settling with the San Bernardino County Sheriff’s Aviation unit. There he worked on Bell, MD, and Eurocopter helicopters as well as the units piston, turboprop and jet aircraft for 12 years. He currently works as a Quality Assurance Supervisor for L.A. Cities Aviation Support Division.