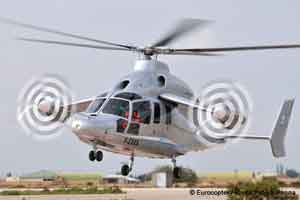 Eurocopter is working on a concept aircraft that's a hybrid of a helicopter and a fixed-wing plane, the company announced today.

Called the X3, the concept rotorcraft has a rotor system and airplane propellers at either side and is designed to offer "the speed of a turboprop-powered aircraft" while boasting the hovering and vertical take-off and landing capabilities of a helicopter.

Ultimately, Eurocopter hopes to sell its concept to organizations that require "maximum cruising speed." Eurocopter said that the hybrid rotorcraft could be invaluable on search-and-rescue missions and other highly time-sensitive operations by coast guard, medevac, and special forces units. On a commercial level, the rotorcraft could serve as an intercity shuttle, Eurocopter said.

For the X3 design, Eurocopter uses two turboshaft engines to power a five-blade main rotor system atop the aircraft as well as two propellers installed on stubby fixed wings on either side of the fuselage.

The X3 was first flown on September 6 in France. The company said that it plans to continue testing the concept through December until the aircraft hits 180 knots (207 mph). Ultimately, Eurocopter hopes to open the X3 up in March to see if it can handle a sustained cruising speed of 220 knots (253 mph).