GPS: we hear that term used by someone, in some profession or occupation almost every day. More and more aircraft are using it for navigation. We may even use it ourselves! People driving their cars use GPS, people hiking use GPS, it even allows cell phones to work. It’s in my golf cart when I am on the course. Just what is GPS? Let’s take a closer look.

The global positioning system (GPS) is used in a wide variety of applications that include timing, roads and highways, space, aviation, agriculture, shipping, railroads, environment, public safety and disaster relief, surveying and mapping, and recreation, just to name a few. Please forgive me if I left out your favorite. That’s a pretty big list with lots of users. That said, here is a primer, if you, will on GPS.

GPS is a U.S. space-based radio navigation system that provides reliable positioning, navigation and timing services to civilian users on a continuous worldwide basis, freely available to all. It also provides services for military applications, but we are not going to discuss that in this article. For anyone with a GPS receiver, the system provides accurate location and time information for an unlimited number of people in any weather, day and night, anywhere in the world.

GPS consists of three parts: satellites orbiting the Earth; control and monitoring stations on the Earth, and the GPS receivers owned by users worldwide. GPS satellites broadcast signals from space; these signals are picked up and identified by GPS receivers. Each GPS receiver then provides 3-D location (latitude, longitude and altitude), plus the time. The U.S. Air Force develops, maintains and operates the space and control segments.

The space segment consists of a nominal constellation of 24 operating satellites that transmit one-way signals that give the current GPS satellite position and time.

The control segment consists of worldwide monitor and control stations that maintain the satellites in their proper orbits through occasional command maneuvers, and adjust the satellite clocks. It tracks the GPS satellites, uploads updated navigational data and maintains health and status of the satellite constellation. 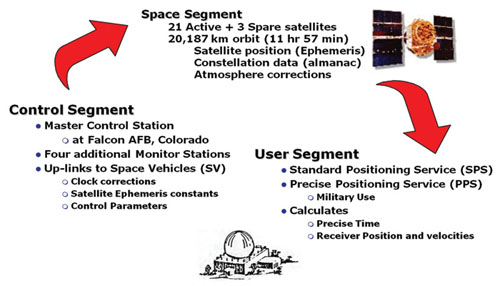 The user segment consists of the GPS receiver equipment, which receives the signals from the GPS satellites and uses the transmitted information to calculate the user’s 3-D position and time. GPS handsets are readily available through a host of commercial retailers, in stores and on the internet. Equipped with these GPS receivers, users can accurately locate where they are and easily navigate to where they want to go, whether walking, driving, flying or boating.

GPS has become a mainstay of transportation systems worldwide, providing navigation for aviation, ground and maritime operations. Disaster relief and emergency services depend upon GPS for location and timing capabilities in their lifesaving missions. Everyday activities such as banking, mobile phone operations, and even the control of power grids are facilitated by the accurate timing provided by GPS. Farmers, surveyors, geologists and countless others perform their work more efficiently, safely, economically and accurately using the free and open GPS signals. Since we are in the aviation business, let’s concentrate on what GPS does for us in that arena.

Aviators throughout the world use GPS to increase flight safety and efficiency. With its accurate, continuous and global capabilities, GPS offers seamless satellite navigation services that satisfy many of the requirements for aviation users. Space-based position and navigation enables 3-D position determination for all phases of flight from departure, en route and arrival, to airport surface navigation.

The trend toward an area navigation concept means a greater role for GPS. Area navigation allows aircraft to fly user-preferred routes from waypoint to waypoint, where waypoints do not depend on ground infrastructure. Procedures have been expanded to use GPS and augmented services for all phases of flight. This has been especially true in areas that lack suitable ground-based navigation aids or surveillance equipment.

New and more efficient air routes made possible by GPS are continuing to expand. Vast savings in time and money are being realized. In many cases, aircraft flying over data-sparse areas such as oceans have been able to safely reduce their separation between one another, allowing more aircraft to fly more favorable and efficient routes. This saves time and fuel, and increases cargo revenue.

Improved approaches to airports, which significantly increase operational benefits and safety, are now being implemented even at remote locations where traditional ground-based services are unavailable. In some regions of the world, satellite signals are augmented or improved for special aviation applications such as landing planes during poor visibility conditions. In those cases, even greater precision operations are possible. 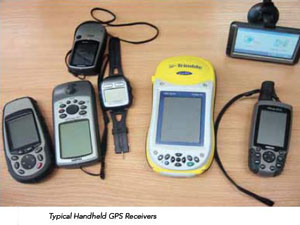 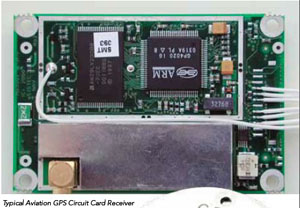 The good news for the aviation community is that GPS is being constantly improved and modernized. A main component of the ongoing civilian modernization effort is the addition of two new signals. These signals complement the existing civilian service. The first of these new signals is for general use in non-safety critical applications. The second new signal will be internationally protected for aviation navigational purposes. This additional safety-of-life civilian signal will make GPS an even more robust navigation service for many aviation applications.

The second safety-of-life signal will enable significant benefits above and beyond the capabilities of the current GPS services. The availability of this signal offers increased instrument approach opportunity throughout the world by making the use of dual-frequency avionics possible. Dual frequency means that errors that occur in the signals due to disturbances in the ionosphere can be significantly reduced through the simultaneous use of two signals. This will improve the overall system robustness to include accuracy, availability and integrity, and will allow a precise approach capability with little or no ground infrastructure investment.

Reliance on GPS as the foundation for today and tomorrow’s air traffic management system is a major part of many national plans. Those aviation authorities that are moving forward with GPS have observed and documented reductions in flight time, workload and operating costs for both the airspace user and service provider. GPS also serves as an essential component for many other aviation systems, such as the enhanced ground proximity warning system (EGPWS) that has proven successful in reducing the risk of controlled flight into terrain, a major cause of many aircraft accidents.

To sum it all up, the benefits of GPS are:

• Continuous, reliable and accurate positioning information for all phases of flight on a global basis, freely available to all.

With more and more helicopters utilizing GPS as their main navigation aid, it should not come as a surprise to you, the helicopter maintenance professional, to see it in some of the helicopters you are maintaining. Hopefully this article has helped you gain a better perspective of what GPS is.