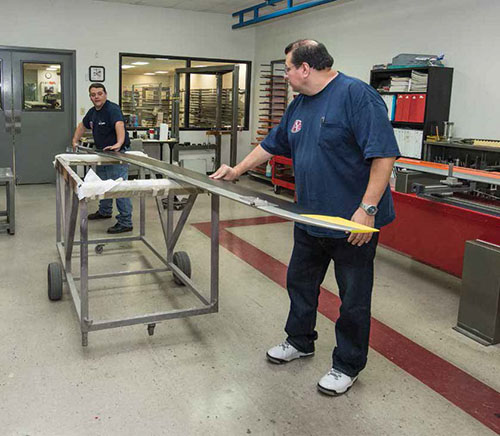 When the first helicopters appeared on the scene, the balancing of the rotor blades relied more on art than on science. Their rotor blades were made from mixtures of different wood types that were assembled as major sections. These sections were later bonded together and experienced craftsmen such as carpenters and cabinetmakers were hired to assemble and shape the blades. Their tools were routers, templates, adhesive and much skill and patience.

Once these first blades were installed on the helicopter, the importance of proper weight distribution in the blades quickly became apparent, as pilots and passengers were bounced around considerably in their seats until the mechanics got it right and smoothed it out. It was discovered by those in charge that it would be best if the chord and span balance of each blade was as close to its mates as possible, and that the shape of each blade was identical. This was difficult on wooden blades because different woods have different densities and moisture content which would cause weight differences throughout the blade, depending on the shipment of the wood received. Additionally, wood taken from different trees would bend differently and cause the blades to flex differently. Thus began the “art” part of the first rotor blade balancing operations. 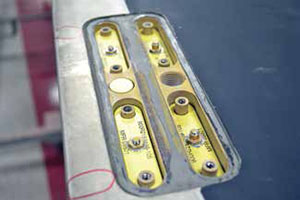 In order to deal with these early problems, wood used during early blade manufacturing was carefully chosen and matched by lot numbers. The blades were manufactured as sets of two and each set used wood from the same matched lots of wood. Once done, these blade sets were serialized as a set and would fly well together if the wood types had been matched as closely as possible in each blade set. These early blades were not interchangeable. If one blade was damaged beyond repair, the set was not useable and had to be retired from service.

Initially, newly manufactured blades were balanced to a “master blade” that was created by the manufacturer. It was common for a blade shop to have walls full of master blades to use for balancing a repaired blade.

A “static balance” is always done in the shop where there is no wind and is done at room temperature. Here weights are most often installed at the tip using studs that were installed during the blade manufacturing process, but they can be also installed in the body of a blade if the structure does not permit a tip installation. 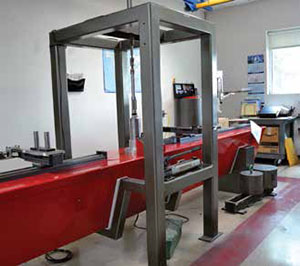 The balance can be done using a large fixture which is calibrated to the master blade, to mount and support the blade during the balance process. Increased scale sensitivity can be used when greater accuracy is required.

Installing these weights allowed the shop technician to match the blade being balanced to the factory master blade. This allowed exact matching in chord and span moments before the blade is installed on the helicopter. The weights are usually installed or removed at the tip because balance is much more accurate through adjustment of the tip weights.

People often ask, “How are balance master blades made, and how did they make the first master blades?” This is a great question. The first master blades made were profiled to the ideal design shape by hand and flown on the helicopter or a whirl tower after they had been adjusted to the desired balance values. Then the blades that exhibited the best average flight characteristics were marked as master blades, and these were the models for all the following blades of that type. Typically, the average was taken of at least 10 blades.

The goal of static balancing was to try to match the values of the newly manufactured or repaired blades to the calibrated master blade. Now, if all new blades could be manufactured to the same shape, weight or profile, all blades would lift and fly identically. However, minor shape differences influence flight characteristics of a new blade and can cause lift differences. These lift differences can only be detected when the blade is in motion on the helicopter or a whirl tower where lift is generated. Adjusting for lift differences calls for a rotors-in-motion dynamic balance, and thus the mechanics began to learn the “science” of blade tracking and balancing. 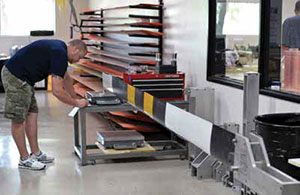 After a new blade has been statically balanced in the shop, it is installed on the helicopter. In order to achieve the best possible balance, the center of mass of the rotor disk must be located at the mast, or the rotor disk will try to wobble like an unbalanced load in a washing machine. This is called a lateral imbalance, is felt side to side and it is corrected by adjusting tip or root weights to ensure the tip balance moments are identical in each blade.

Once the lateral balance adjustments are worked out and the rotor is spinning smoothly with no vibration, it is time to ensure that each blade has the same lift as its mates while the rotor disk is spinning. If the lift of each blade is not the same, there would be a vertical vibration felt each time the blade went around as differences in lift are felt. There are several ways to adjust the overall lift of each blade, and this falls under the “science” part of doing the balance on the helicopter.

Long before modern electronic balance equipment was developed, it was thought that if each blade had the same track as it went around the rotor disk, there were no lift differences and we could all go home early. However, our world is rarely perfect, and in this far-from-perfect world, it was sometimes necessary to take steps to adjust the lift of one or more blades in the system. This is where the “tracking flag” method of adjusting track and lift began.

The method of doing this back in the day was risky and not for the faint of heart. It required a steady pilot and a brave mechanic who held a long pole with a short cloth flag at the end. The blade tips were marked with different colored chalk or crayon on each blade tip. The guy on the ground carefully tilted the cloth on the pole into the spinning rotor tips. I have spent many hours flying a helicopter during flag-tracking operations and the thought of having a pole tilted into the rotor tips is rather foreign to most pilots. I always trusted the pole holder to try not to get distracted by a pretty girl walking by or an airplane flying overhead. I mentioned to him how much his hands hurt if the pole would accidentally hit the blade tip while he was holding it. Each blade would leave colored marks on the cloth and show where each blade tip passed by. This showed the flight path differences or “tracks” of each blade tip, and indicated which blade required raising or lowering to match the track of the other blades. There are several adjustments that a mechanic can use to raise or lower the track of a blade, and each adjustment will change the lift of that blade.

One adjustment is to change the blade pitch angle of the blade up or down by adjusting the pitch links at the root. Another is to adjust the blade trim tab. Each method will change individual blade lift and allow the mechanic to bring the track (and lift) in line. For years, this was the most often used method of adjusting dynamic balance on the helicopter.

Some manufacturers track their newly-manufactured blades on a whirl tower, which closely approximates a helicopter rotor system in motion. First, the new blade is statically balanced to a master blade in the shop. Then the blade is mounted on the tower with a calibrated master blade along with one or more blades that need to be balanced. Some whirl towers use two blades and others use three. The pitch links on the tower rotor head have load cells that measure the lift of each blade as it rotates and allows it to be adjusted relative to the master blade.

The difference between tracking on the helicopter and the whirl tower is that in addition to pitch link and trim tab adjustments, the operator is able to do a chord weight shift. This is very effective and can change the blade lift without a drag penalty of adjusting the trim tab. Shifting the weight aft causes a blade to climb, whereas shifting the weight forward causes it to dive. Most rotor blades are designed to have a chord center of gravity (CG) of approximate 25 percent aft of the blade leading edge (which is a neutral position). This ensures the blade’s stability in flight and that the flight characteristics of the blade will be predictable when it is installed in the field.

The industry has recently been experiencing great success with new portable computerized balance and tracking equipment. These new units give the operator information about tracking and balance and they fly with the helicopter to diagnose and make suggestions of what adjustments need to be made to the rotor system. They offer information about weight changes to make, whether to adjust pitch links, or whether to sweep the blades to concentrate or reduce effective weight in a certain part of the disk. These units can usually do this in one or two flights which results in considerable cost savings. I, for one, am much happier because I don’t have to do any more flag-tracking flights.

Dana has been a chief pilot instructing in airplanes and helicopters since 1970. He has been active in blade repair since 1981, and is presently vice president of International aviation Composites Ltd in Fort Worth, TX. He has been teaching rotor blade preventive maintenance at FAA IA refresher clinics for 10 years. He is also on the advisory board of Helicopter Maintenance magazine.