Hydraulic Fluid Dialysis Why This Is Good For Your Helicopter

I have seen the word helicopter defined as “too many moving parts moving in too many different directions all at the same time” — not too far off from reality, in that there are a great many moving parts all moving to accomplish flight. There are mechanical systems, electrical systems, pneumatic systems and hydraulic systems all working together to “fly” the helicopter. But just what is a hydraulic system?

One definition of the word “hydraulic” is “to operate by the pressure of water or other liquids.” Hydraulic systems allow a mechanical force to be transferred along curved paths (through pipes or tubes) that would be difficult for solid mechanisms such as levers or cables to negotiate efficiently. The basic principle of a hydraulic system involves using a pressurized fluid to create hydraulic energy. In such a system, the hydraulic fluid serves as the means of power transmission.

At the end of the 18th century, the inventor Joseph Bernoulli designed one of the first hydraulic systems. Bernoulli filled a small and large cylinder with liquid and connected them with a pipe. Noting Pascal’s Law, Bernoulli saw that pressure placed on the smaller cylinder exerted a vast amount of pressure on the larger cylinder. In a simple machine such as this, Bernoulli used water as the hydraulic fluid. When later inventors created more advanced and complex hydraulic systems, these systems required petroleum-based or synthetic fluids.

Hydraulic fluid is the elixir of life for helicopters. Without the hydraulic system, the pilot would not be able to overcome the aerodynamic feedback forces generated in flight and could not control the helicopter. In medium and heavy helicopters, a hydraulic boost is necessary to assist the pilot in his or her operation of the flight controls. It’s like having power steering in your car. 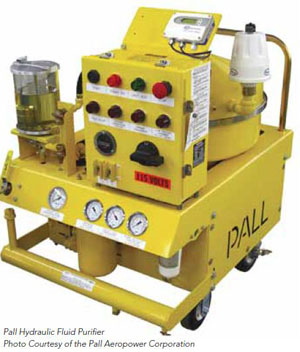 How does purification help in the long run? Firstly, it removes 80 percent of homogenized air from the hydraulic fluid, preventing catastrophic failure to the internal parts of the system, and it also makes the helicopter fly like the designers intended. Secondly, it removes cloridated solvents from the system, preventing corrosion to the internal parts of the components. Thirdly, it removes most of the contamination down to three microns in size. Key benefits are increased safety, reduced maintenance costs, improved reliability, increased OR rate and reduced waste management costs.

When OEMs design helicopters, they put filters in the system as per Mil-F-8815, and they range in size from 25 microns down to three microns. These filters are tested in a static conduction condition, and a helicopter is usually in a very dynamic conduction state. When the filter manufacturers test these filters to get a 25-micron rating, they use AC fine test dust. This dust is found only in Arizona. The manufacturer takes dust particles 25 microns or more and passes them through the filter. The 25-micron dust particles are perfectly round and are trapped by the filter medium. In the real world, we know this is not true. In fact, the particles are all different shapes. As the flight controls are continual moving, particles that had been trapped by the filter medium are flushed back into the system.

I always wondered why I would find dirt hanging on the finger screens and side control valves and pumps. Also, I wondered why the filters didn’t catch the particles. After finding out how the filters are tested, I understood why this was happening. With this going on in the hydraulic system, it’s important that we keep the system clean. The hydraulic purifier will do that for your helicopters.

External leaks cause fluid contamination by drawing dirt into the system on piston rods and pump shafts which increases the wear on parts. If let go for very long, it could have severe damage to the hydraulic system. Fluid contaminated with chlorinated solvents can also cause corrosion on control valves and other tight tolerance components in the system. It can also combine with particulate contamination to create organic acids which can etch component surfaces, causing flow by leakage in the components. Dirt particles can cause the flight controls to bind. Air is also bad for the hydraulic system. When air is introduced into the hydraulic system, it can cause the hydraulic pump to destroy itself when the air is compressed. This is evident by the loud pump noise and elevated temperature on pump case. This is caused by the compressed air passing between the port cap and barrel by compressing the air bubble, where the surface temperature of the air bubble elevates to 4,000 degrees. This causes pre-detonation between the port cap or valve plate, removing metal from each component. This will burn the hydraulic fluid on the surface, causing carbon particulates to form soot.

What sort of problems will hydraulic fluid purification help prevent? It reduces wear in rotating parts like hydraulic pumps. Bearings will have little or no wear and this reduces the cost for pumps to go to overhaul. It reduces wear in the neutral leakage in the control valves. It also reduces overhaul cost of the aircraft components overall and increases aircraft reliability. Waste management is also a big deal and those costs are also reduced.

Hydraulic fluid dialysis is good for your helicopter. If you are having hydraulic system problems, maybe you should give it a try.

Bob Peterson entered the aviation field when he was drafted in 1963, despite being in college working towards a degree in mechanical engineering. He joined the U.S. Air Force and went to technical school on hydraulics and spent five years working on hydraulic systems on a virtual airshow of aircraft (the F-4, F-105, F-106, F-102, B-52, KC-135, C-130, C-54, C-47, H-19 and the H-43, among others). If a new air aircraft came in, Bob volunteered to work on it.

After leaving the military, Peterson went back to college to get his A&P certification and arrived at Columbia Helicopters in 1972. In 18 months, he became the hydraulic shop chief and held that position for more than 30 years. Peterson was a member of the Air National Guard for 31 years and is a member of the Standards of American Engineering (aerospace actuation, control and fluid power systems) A-6.  He is currently setting up a hydraulic shop for Sunset Helicopters Inc. in Aurora, OR.