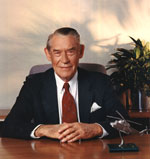 "It is with great sadness that we announce today the passing of our founder and Chairman Emeritus, Charles H. Kaman. Mr. Kaman passed away peacefully this morning.

"Charlie Kaman, as he was affectionately known by so many, was a bona fide aviation pioneer and helicopters were his first love. He founded Kaman Aircraft Corporation in 1945 and went on to lead our company as CEO for an astounding fifty-five years. He led a remarkable life as an inventor, entrepreneur, musician, humanitarian and visionary. His career was, in many ways, the epitome of the American dream.

"While Kaman Corporation stands as a testament to his significant business accomplishments, a series of distinguished awards speak to his technological and humanitarian achievements. Mr. Kaman received many honors from his peers and other admirers. In 1997, he joined other aviation greats Charles Lindbergh, Jimmy Doolittle, Neil Armstrong and Igor Sikorsky as a recipient of the National Aeronautic Association's Wright Brothers Memorial Trophy, the nation's premier aviation award. President Clinton presented him with the National Medal of Technology, the nation's highest recognition for contributions to technical excellence, in 1996. He founded the Fidelco Guide Dog Foundation, which has enabled thousands of the visually impaired to live more independent and productive lives.

"In the end, Charlie Kaman was all about human potential. Of all of his technical accomplishments, he was most proud of the more than 15,000 lives that Kaman helicopters were estimated to have saved in rescue missions over the second half of the 20th century. In the company's 1967 Annual Report, he said, 'Kaman Corporation is people. The most important factor in our growth has been the demonstrated capability of our people to rise to new challenges, meet them, and go on from them. Their devotion and dedication to our common goals is a source of strength and inspiration to all of us.'

"Charles H. Kaman was intent, in all of his endeavors, on creating an environment of integrity where people could realize personal and mutual achievement while serving the customer to the best of their abilities. In doing so, that brought them satisfaction and success as well as benefits to many other people. That's what excited Charlie Kaman and that ideal will live on in the company he founded.

"Our thoughts today are with Charlie's children and grandchildren. In the coming days plans will be announced to recognize and celebrate the life of this visionary leader."

More information is available at www.kaman.com