Today’s helicopter engines are marvels of technology and power. These engines have heavy demands placed on them for performance and reliability. In order to sustain these demands, knowing your helicopter’s operating environment and how it impacts maintenance is paramount to managing and operating a safe, efficient and cost-effective helicopter operation.

Environmental conditions such as air pollution, salt, air and dirt particulates all have a negative impact on the performance and reliability of helicopter engines, and all of these environments put an increased demand on the maintenance team to control and minimize the effects of these conditions.

To add to this, you may well be subject to all of these conditions or different combinations of these performance-robbing environments at the same time. These environments not only degrade the performance and expected component life, but in tandem greatly increase the cost of maintenance tasks if not managed correctly. In nearly every case, damage to an engine due to erosion or corrosion is not covered by any manufacturers’ warranty program. This puts the responsibility squarely on the maintenance team to manage it.

The engine maintenance manuals have good guidelines for dealing with each of these environments, but often these guidelines are the minimum standards and may not be optimum for the helicopter/engine combination operating under your particular conditions. Often operators do not identify the impact of these environments until it is too late, either at overhaul or when the operating margin has been lost beyond airworthy standards.

The helicopter does not have to be operating over salt water to be subjected to serious corrosion issues. Operators can be miles from the ocean and still be in a heavy salt air environment. Operating in this environment requires intensive frequent fresh water rinses and monitoring of engine performance through engine power performance checks and visual inspections, to ensure that the engine is not losing performance or approaching a non-airworthy condition due to corrosion or damage to the gas path components.

Operating in major metropolitan or industrial areas or performing firefighting missions submits your engine gas path components to a silent killer called sulfadation. Sulfadation corrosion results in irreparable damage to the hot section components. Flaking and intergranular corrosion sets in, performance is lost and the blades become so badly degraded that a catastrophic failure is possible. This environment demands that routine performance recovery washes be performed. A borescope inspection is key to seeing if your wash cycle and the soap you have selected are doing their jobs. In heavy pollution, the turbine blades get coated in green-, yellow- and red-colored patina. This is the oxidized pollutants sticking to the blades. 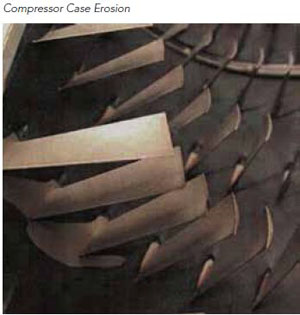 If the wash cycles and chemicals are doing their jobs, the coloration on the blades will be minimal. If increased wash cycles are not having the desired results, talk with your engine field service representative and see what he or she recommends, or try another approved wash chemical from the list in the maintenance manual.

Erosion due to dust and dirt can be either a simple thing to control or nearly impossible to control. This is dependent on the available equipment and technology on the helicopter. 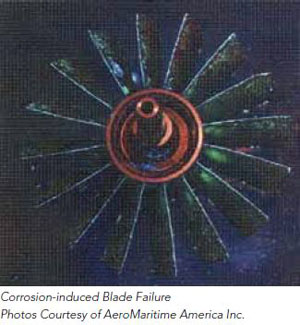 Many helicopters have systems that help restrict the entry of erosive/corrosive material into the gas path, but some helicopters are still designed and delivered with nothing other than a metal screen in the inlet to stop large objects. These screens are absolutely useless in blocking dirt and dust. 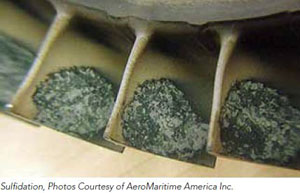 Many helicopters have “barrier filtration systems” available either as aftermarket kits or manufacturer options. These are the single most effective systems that can be installed to combat erosion and can have some effect in minimizing salt exposure. They utilize a special cloth filter that is usually treated with light oil and stops nearly 100 percent of the erosive material that can enter the engine. These systems require routine maintenance and inspection, but the cost of these systems is insignificant compared to the premature replacement of a compressor section due to erosion and can ensure that the engine’s rotating components are serviceable for their entire scheduled life cycle.

Another type of system available is a “particle separation system” that can greatly reduce the erosive particulates and salt-laden water that enter the gas path. They do this by using inertia through air flow to separate the heavy dirt particles from the air flow. They are effective and generally require minimal maintenance. 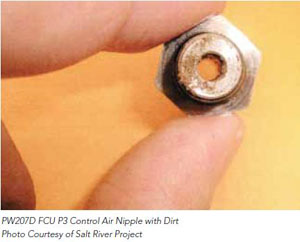 Additional impact areas that require inspection and maintenance in these conditions are control air path filters, lines and components. The air that is bled off the compressor to regulate and control fuel systems and provide oil seal air pressure can be impacted by salt and dirt environments. Bleed air filters can become clogged and cause engine surging or control issues. Watch these filters closely and adhere strictly to the manufacturer’s inspection criteria. One fast and simple initial check is to blow through them by mouth. If there is any notable restriction in airflow, then it needs cleaning and inspection. Compare the airflow to a new filter first. Some engine models do not filter this bleed air at all, allowing contaminates to enter the internal air lines and components. This requires a strong understanding of the airflow through the systems and where to inspect for potential problems.

The only way to monitor and predict what maintenance actions are required is consistent power performance checks and routine borescope inspections. These tools, if used correctly, can save operators tens of thousands of dollars. They allow you to keep your helicopter available for missions in the best possible condition and allow you to predict and plan for premature engine repairs, rather than react to them with little to no notice.

Will Barks is the Chief of Aviation Maintenance for Salt River Project, a Water and Power Utility in Phoenix. He got his start in the United States Marine Corps as a power plant mechanic on the AV8B Harrier aircraft. Will has been active in aviation maintenance for 23 years, with a background in turbine engine overhaul and repair, as well as field maintenance of turbine powered fixed- and rotor-wing aircraft.