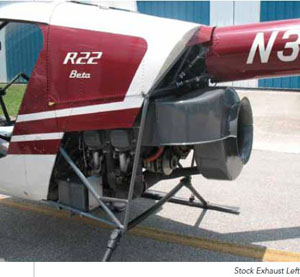 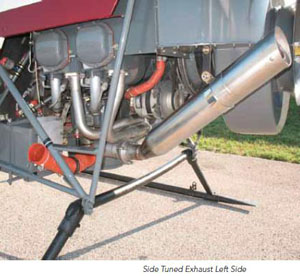 What’s the big deal about a tuned exhaust, you ask? How about a reduction in fuel flow and the ability to go faster and operate in hotter and higher density altitudes for the same manifold pressure as with the original exhaust? Sound good? Read on!

HeliMx: Who came up with the idea to put it on the R22?

Tilman: We’d been thinking about developing a system for the R22 since our first exhaust system came out in 1999. However, one of our dealers in New Zealand, Matt Bailey of Performance Aviation Ltd., has a lot of experience on the Robinson R22 and he came-up with a plan to R&D our exhaust on the R22. In partnership with his company, we started with one of our existing designs and then Matt did the initial flight testing and design optimization. Performance Aviation received New Zealand CAA approval and we started shipping the exhausts to New Zealand. The initial response was so encouraging that we decided to proceed with U.S. certification. Eighteen months later, we had the final FAA approval.

HeliMx: So just how does the tuned exhaust work?

Tilman: The traditional/original type-certificated exhaust designs (including that of the Robinson R22) utilize a common muffler chamber where the exhaust pulses accumulate and interfere with each other. The gas pressure inside the muffler chamber builds and flows back up the riser tubes. This creates a higher pressure at the exhaust valve during the valve overlap phase, which in turn limits how much of the combusted exhaust gases are actually able to leave the cylinder before the exhaust valve closes.

During our initial development work, Power Flow measured this effect and determined that with the typical exhaust system described above, only about 80 percent of the spent exhaust gases are able to evacuate each cylinder before the exhaust valve closes. The other 20 percent remain inside the cylinder during the next intake cycle, taking up space that could otherwise be filled with a fresh fuel/air charge.

The Power Flow System exhaust is designed to essentially convert each cylinder’s exhaust pulse into a piston, which carries a strong suction behind it as it travels down the length of tubing. By using primary (header or riser) tubes of specific and equal lengths, these pistons merge and line up in the secondary (tailpipe) tube with the momentum from each pulse helping to pull out the subsequent one. This action also creates vacuum pulses that are timed to reach the exhaust ports when both intake and exhaust valves are open, known as valve overlap, further evacuating the cylinders and helping draw in the fresh fuel/air charge. Instead of roughly 80 percent of the gases leaving the cylinder with a traditional exhaust, a Power Flow-equipped engine empties around 95 percent of each cylinder’s exhaust gases, effectively gaining about 15 percent more volume in each cylinder.

Since the engine has more usable volume with which to generate power, it doesn’t have to work as hard to make the same power. This shows up in the cockpit as needing lower manifold pressure to achieve the same airspeed as compared to the original exhaust. On the R22, we measured a 2.0- to 2.3-inch reduction in the manifold pressure for the same speeds. Per Lycoming’s charts, this is a reduction in fuel flow of about 15 percent, or 1.3 gallons per hour.

Alternatively, the pilot can use the increased efficiency to take off in hotter temperatures/higher density altitudes or to go faster for the same manifold pressure as the original exhaust. The increase in effective power output after adding the Power Flow to the R22 means that the Lycoming O-320 engine limitations are now changed to be the same as the Beta II’s performance, which has a Lycoming O-360 engine. New placards with the revised limitations are provided with the STC. 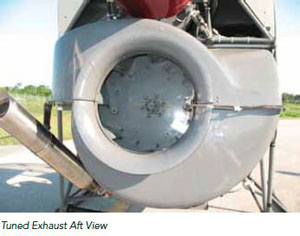 HeliMx: Is it designed for a particular helicopter or any that fly FAR Part 25, 91, etc.?

HeliMx: Are there any sensors used?

Tilman: No sensors are used, but the manifold pressure gauge that is in the aircraft has to be re-marked to the Beta II limitations. We provide an overhauled and correctly-marked gauge with the kit on an exchange basis.

HeliMx: Who would typically do an installation?

Tilman: The exhaust can be installed by any competent A&P. As it is an FAA-approved alteration, a 337 must be signed off by an IA referencing our STC and installation instructions. We have shipped systems worldwide. The exhaust is FAA-certified in the United States, and our partner company in New Zealand, Performance Aviation Ltd., has obtained New Zealand CAA approval.

HeliMx: Who owns the STC?

HeliMx: On average, in terms of hours, how long does a typical installation take?

Tilman: The exhaust system swap should take about two to three hours in total. There is a new bracket that gets installed on the cooling scroll to support our tailpipe/muffler. The manifold pressure gauge gets swapped out with a new one, but that should only be about 20 minutes.

HeliMx: Any tips on dos and don’ts on an installation?

Tilman: Our New Zealand partner reports that the exhaust system won’t fit on aircraft that have the optional, larger 70-amp alternator installed. The engine must be the Lycoming O-320-B2C engine with the large oil cooler (p/n: C649-1 or p/n: A649-2). It is our understanding that most of the helicopters out there have had the larger oil cooler upgrade installed already.

HeliMx: What, if any, are the requirements to maintain the Power Flow Tuned Exhaust System?

Tilman: Our design uses a slip fit for the exhaust header to central collector assembly instead of welds or clamps. This allows each exhaust riser to move independently of the others without leaking. At each annual or 500-hour inspection, whichever comes first, the exhaust system must be removed, inspected and the slip fit lubricated with high temperature anti-seize. In practice, this should take between 40 and 60 minutes total. The slip joints work well and address a number of failure modes found in other exhaust designs — but they have to be maintained.

Unlike the original exhaust, our design does not have a life limit of only 2,200 hours. In practice, the highest reported time on our similar exhaust design is 7,700 hours, so we expect operators to be able to get a considerable amount of time out of the exhaust. 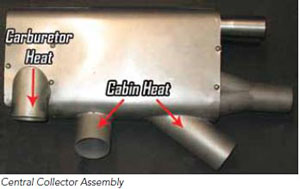 HeliMx: Any inspections on a recurring basis?

Tilman: Just the annual inspection and lubrication as detailed in our instructions for continued airworthiness. Our muffler element consists of a pass-through perforated tube wrapped with sound-absorbing mineral fiber. This wrapping will eventually deteriorate over time. The entire element is designed to be easily field replaceable when required at a cost of only a few hundred dollars, which avoids the time and expense of having to send the muffler out to be rebuilt. The only inspection criteria for our muffler is that during each 50-hour inspection, the technician should shine a flashlight down the tailpipe to make sure the inner perforated tube is intact.

HeliMx: Are you going to have a system for the R22 Beta II?

Tilman: We are considering getting the exhaust approved for the Beta II. As the Power Flow allows the engine to more easily develop its rated horsepower, we have to consider the potential of the operator to exceed the limitations on the transmission. At higher altitudes this isn’t possible, but at lower altitudes, the helicopter could develop more power than the transmission can take. Adding the Power Flow could further affect that. We have been contacted by several fleet operators who could always use a little more power for their higher-density operations and would appreciate the fuel savings for cruise flight.

Darren Tilman is the General Manager and Chief Test Pilot for Power Flow Systems Inc. A certificated FAA A&P and experienced commercial fixed-wing pilot, he graduated from Embry-Riddle Aeronautical University with a B.S. in Aviation Technology and an Associate Degree in Aircraft Maintenance Technology. He has worked in various capacities at Power Flow since 1999. He has two young daughters and a wife who share his passion for all things aviation.