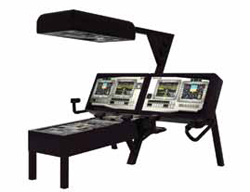 Kratos Defense & Security Solutions provided a sneak preview of its latest maintenance training device for rotor aircrafts, code named the MBRAT, at its booth at I/ITSEC, the world’s largest modeling, simulation and training conference, which was held Nov. 29-Dec. 2 in Orlando.

MBRAT stands for Maintenance Blended Reconfigurable Avionics Trainer and is scheduled for general availability in the first quarter of 2011.

The MBRAT is a new concept in part-task trainers for mastering aircraft Maintenance Operational Checks (MOCs). Students sit within the MBRAT device frame which realistically reflects a rotor craft’s instrument panel, consoles and overheads. However, unlike traditional training devices that can cost millions of dollars per unit, the MBRAT uses an economical blend of computer touch screens alongside physical controls. The combination provides an immersive physical, visual and tactile environment that is far more realistic than computer-based training, yet can be delivered at a fraction of the cost and manufacturing time of traditional simulation devices.

Because the MBRAT combines touch screens within a physical platform emulator, trainers can shift from course to course — for example, from electrical to aviation training curriculums — simply by loading different software in the device. To change from one platform to another, say a Black Hawk to a Chinook helicopter, only minor hardware changes are required to reflect the cockpit differences accurately.

The MBRAT is the first in Kratos’ new family of blended part-task trainers that have been in development at DEI Services Corporation. Kratos recently acquired DEI, a developer of simulation and training devices to the U.S. military and its allies. Kratos delivers Total Training Solutions to its customers in defense, federal government and commercial markets ranging from instructional design and development of web-based and mobile courseware to simulations, gaming and other performance-based education and training solutions.