Rolls-Royce Corporation, based in Indianapolis, pulled aside a curtain at Heli-EXPO to reveal the RR300, its new 300 shp turbo shaft engine. The RR300 seen at air shows is the actual size but the production powerplant will not be shipped in “Rolls-Royce Blue.”

The RR300 is simpler, has fewer discrete components, has a built-in engine monitoring unit and is slightly shorter than the ubiquitous and highly successful Rolls-Royce M250-C20B powerplant.

“This engine was designed to be optimized around 260 to 300 hp,” says Chris Fultz of Rolls-Royce. Fultz is the Program Director for the RR500 and in charge of New Production Introductions.

Rolls-Royce chose Robinson Helicopter of Torrance, Cal., as the launch partner for the RR300.

Robinson and Rolls-Royce worked for a little longer than three years to work out the details of Robinson’s request for a turbine powerplant for the R66, their new five-passenger helicopter.

Robinson wanted a reliable and simple 300 shp turbine powerplant for the company’s first entry into the small helo turbine market.

The RR300 in the R66 (listed in TCDS E4CE as a 250-C300/A1) is the first in a family of new turbo shaft powerplants from Rolls-Royce. The development program for the RR500 — slightly larger than the RR300— was announced in 2009 at Heli-EXPO. The RR500 is now undergoing endurance testing. The projected certification date for the RR500 is in mid 2012.

Fultz says that the engineering team for development took the RR300 from concept to certification in 24 months.

“Seventy-five percent of the team on the 300 has carried forward to the 500,” says Fultz.

“The compressor design is similar to the M250 Series IV but we used a lot of newer technologies from the design standpoint, computer modeling, computer simulations and a lot of very high-powered computing work to create one of our most efficient designs for a single stage compressor that we’ve ever done,” said Fultz.

“The pressure ratio is a little bit higher than what it is on the C20B; we get a little more airflow and that allowed us to really run this engine at lower temperatures than a  C20B would run for similar power and that helped us increase the turbine life from 1,750 to 2,000 hours.”

Although the RR300 is rated at 300 shp, Robinson has de-rated it slightly to 270 shp for five minutes and a normal cruise power setting of 240 shp.

Fuel economy is excellent for a small turbine with specific fuel consumption at 0.675 lb/hr/hp. or approximately 23 gallons per hour in cruise.

At 2,000 hours, R66 operators have two engine overhaul options. They can exchange their RR300 for a factory-rebuilt, zero-time engine that’s ready to go back in, or they can send their engine through one of the R-R repair centers to get their specific engine overhauled.

“We’re also looking aggressively at a fleet hour-type program where the operator would pay a certain fixed fee per operating hour,” says Fultz. The Rolls-Royce program (called TotalCare) is similar to other comprehensive “power by the hour” programs and includes transportation costs for R-R technicians, tech pubs revision services and annual training for one technician, as well as compliance with mandatory service bulletins and loaner engines during scheduled and unscheduled shop visits.

Fultz tells HeliMx that the advantages of the TotalCare service option include fiscal budget planning and the transfer of high-cost high-risk unscheduled maintenance events such as engine damage from the operator to R-R.

The RR300 like the C20B is a reverse-flow turbo shaft engine. Although ducting compressed air from the forward-mounted compressor section aft through a side air flow tube before turning it into the combustor section where the airflow flows forward (back toward the compressor) through the combustor section and turbine section at first seems like an unnecessarily convoluted airflow scheme, this design results in a compact unit that is easy to service.

The backbone of the RR300 is a robust gearbox assembly that provides the powerplant mounting hard points. The gearbox supports the compressor, combustor and turbine modules. The backbone layout permits the modules to be lighter in weight and simpler to access for service.

“All the weight of the components and the airframe installation are handled through the gearbox,” says Fultz.

In addition to the new compressor design, additional changes have reduced both the parts count and number of components incorporated in the design.

“The goal when we worked on the design was to eliminate that part,” says Fultz. The engine is also significantly quieter since compressor air isn’t vented during the engine start cycle.

There’s no longer a mount pad on the compressor section for the bleed valve. Another advance is the elimination of the tach generators and their mount pads. Engine speed is sensed by using electronic speed sensors. These sensors are very accurate, require little maintenance and provide speed data for airframe tachometers and an engine monitoring system that’s built in to the engine.

The RR300 engine monitoring system is mainly used for data recording. Fults says that they look at temperature, torque, N1 and N2 speeds. The system also alerts maintenance staff through an advisory light whenever a limit is busted.

According to Fultz, the data-logging system will be invaluable for the Rolls-Royce RR300 design and field service staff by providing a full window of engine operational data at each engine overhaul. That data can then be compared to the actual condition of the internal engine components (hardware) during the overhaul process.

“We believe these comparisons will help us extend some of the engine lives and component replacement intervals,” says Fultz.

He also tells HeliMx that the RR300 production engine No. 3 has undergone endurance testing in an automated test cell that ran the engine through simulated flight endurance operational cycles. 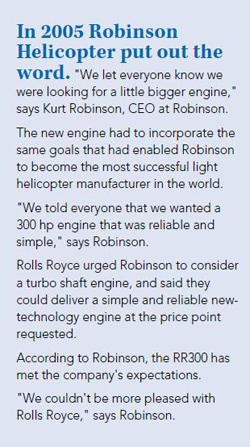 “Our goal was 2,000 hours of endurance time which is considered any time that the engine is producing more than 100 shp,” says Fultz.

The goal was achieved after 2,600 hours total operating time and more than 3,000 starts. After the test R-R did a complete tear-down inspection. According to Fultz, the after-test inspections and checks revealed that the condition of the engine was “exceptional.”

In early 2012, there’s a plan to put the same reassembled engine back on the test cell and run it for another 2,000 hours.

“The intent is for that engine to always be ahead of the engines in the fleet so that if there are any issues we find them before the fleet or operating community does,” says Fultz.

Fultz says that the first major engine maintenance on the RR300 is at 2,000 hours. The Robinson scheduled maintenance and inspection schedule includes: “Inspect engine per RR300 series operation and maintenance manual (OMM) at 200-hour intervals or annual, whichever comes first.”

AS5780 high performance capabililty (HPC) oil is specified for use in the RR300. Engine overhauls are required at 2,000 hours or 3,000 cycles, whichever occurs first.

In January 2011 there are eight R 66s being flow by operators situated in the western United States.

Fultz says that Rolls-Royce is interested in providing the RR300 engine for retrofit installations via the supplemental type certificate (STC) process under certain conditions.