Whoever coined the phrase “routine maintenance” for working on helicopters surely didn’t mean doing the same work over and over again. As most helicopter maintenance specialists will tell you, there is hardly anything “routine” about working on helicopters, except that there is almost always work to do. This is certainly the case for Columbia Helicopters, where the company’s fleet of seven Model 234 Chinooks and 14 Model 107-II helicopters often spend the majority of daylight hours in the air.

“Routine” might apply to the fact that commonplace maintenance work is performed repetitively. Perhaps “perpetual maintenance” is a more appropriate phrase.

“The days may seem all the same when you’re out there turning wrenches,” says Kurt Koehnke, Director of Maintenance for Columbia, “but you can really see the differences when you take a step back and look at the broader picture.”

Columbia’s aircraft work around the globe and, accordingly, maintenance functions must be performed in a wide variety of weather conditions. The company currently flies in Peru, Papua New Guinea and Canada (through affiliate company Helifor Canada), as well as in operations throughout the Western United States.  Columbia Helicopters has previously worked in nearly every U.S. state, as well as in Malaysia, Laos, Sudan, Egypt, New Zealand, Australia, Mexico, Chile and Ecuador.

Wes Lematta started the company with a single, small helicopter in 1957. He redirected the focus of the company in the 1960s when he bought the first helicopter ever purchased exclusively for commercial heavy-lift helicopter operations. In 1969, Lematta proved the feasibility of successful helicopter logging on a large scale and also purchased the first of the then-Boeing Vertol 107-IIs that have become nearly synonymous with Columbia Helicopters. With heavy-lift helicopter operations, the old adage “time is money” is never truer. Thanks to Columbia’s maintenance program, the company’s customers seldom have to wait for a helicopter to perform their work. Columbia Helicopters has achieved a 97 percent mission availability rate over the years.

“Because we’re working around the world and in a variety of operations, we have to have an exceptional maintenance program and a really flexible maintenance crew,” says Koehnke. “Some of our maintenance depends on the type of work we’re doing, and all of it is affected by the number of hours that the aircraft are flying. In short, logging maintenance can have a different set of challenges from maintenance work in the oil fields, and both can have different challenges from fire fighting or construction projects.”

It All Comes Down to Logistics

Keeping a fleet of helicopters flying – whether within the company’s home state of Oregon, or thousands of miles from the office, can be a headache. However, Columbia’s extensive history has helped the company develop systems to keep the rotor blades turning.

“Fifteen years ago, we started using cell phones,” says Koehnke. “Before that, if there was a problem with the aircraft, the crew chief might have to drive for two hours to get to the closest phone. That meant the crews became very skilled at troubleshooting, and we made sure they carried a pretty extensive selection of spare parts and components.”

As much as advances in communication have aided Columbia’s crews in the field, the crews now also utilize satellite telephones and the internet. One factor remains the same throughout the company. “It all comes down to logistics,” explains Koehnke. “It doesn’t matter whether we’re working in Vya, Nev., or the jungles of Peru — we have to be able to move parts and people to the aircraft.”

Moving people cross country or between continents once added to the logistical headache, but that is no longer an issue. “One big advantage for us now is that we have people in house who are coordinating travel,” says Koehnke. “We generally know what our crew rotation is well in advance, so we’ve developed a routine for making the appropriate travel plans. If there is a change to routine, say if an overseas mechanic needs to stay for an extra week, then our in-house travel coordinators are able to deal with the matter quickly.

“Someone Always Has the Answer”

Each of Columbia’s field maintenance crews combines for many years of aviation maintenance experience. However, even the most experienced crew will sometimes encounter situations where their expertise is not enough. “Our field crews are all supported by the maintenance crews at our headquarters in Aurora,” says Koehnke. “This support system begins with communication between the field crew and the shops, each of which has duty personnel available to provide assistance around the clock. Thanks to satellite technology, we can also include all of the other Chinook or 107 crew chiefs into the troubleshooting sessions. Chances are pretty good that if we have a problem with one aircraft, another crew chief will have encountered the same issue previously. That’s one great thing about working with such an experienced group — between the shops or the field, someone always has the answer.” 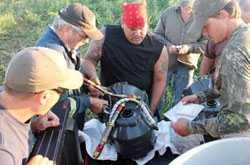 Scott Parcell is crew chief on N241CH, a Columbia Model 234 Chinook in Peru. He agrees that communication between crews is beneficial when it comes to maintenance. “If I have a problem with my helicopter, I can get online with the office or other 234 crews and we can begin trouble shooting right away,” explains Parcel. “We can even send photos and short videos back and forth to help everyone figure out the best solution for any given problem.”

Getting the correct answer to a field maintenance issue is sometimes only part of the battle. “Knowing what’s wrong doesn’t mean anything if an aircraft is AOG and the part or component needed simply isn’t available,” says Koehnke. “This means we must have a ready supply of spare parts. Each U.S.-based crew carries a reasonable supply of spares and our overseas crews maintain a somewhat larger supply. In countries where more than one aircraft are working, the aircraft can share in this stock.”

Additionally, the company maintains teams of personnel and special equipment kits ready to go on short notice.  “Most of our shops have teams of people that can leave on short notice to support our field maintenance operations,” explains Koehnke. “For example, our sheet metal shop sent crews, tools and parts out about 15 times last year. Most of the work they performed took place after the flight day was completed, and the aircraft was ready to fly again the next morning.”

Columbia also owns and operates two Beechcraft King Airs to shuttle parts and/or personnel to AOG aircraft when commercial methods aren’t fast enough. These aircraft support both the U.S. and Canadian operations, including Alaska. “Our goal is always to get the needed parts or people to the aircraft as fast as possible,” says Koehnke. ”If commercial transportation isn’t available, we launch the King Air.”

Finally, in the event of an unscheduled or unplanned repair, a number of maintenance employees at the company’s headquarters hold passports so that they can hand-carry parts to overseas destinations if necessary and feasible. “International shipping is fine most of the time, but there is always the chance of delays either in shipping or customs,” says Koehnke. “We can send an employee with the parts and proper paperwork and it cuts our delivery time dramatically.” 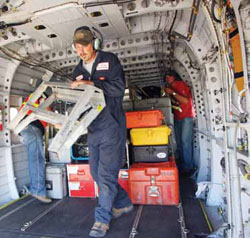 Unscheduled repairs are always handled immediately. If the repair is relatively simple, the aircraft is returned to duty status by the crew chief as quickly as possible. For more intensive repairs, the maintenance crew may chose to simply replace the faulty part or component and return the aircraft to service. At the end of the flight day, the “real” maintenance begins. In order to meet the often extensive daily flight requirements, this generally means that all maintenance is performed after the flight day is over. Even before the daily flight hour totals are added up, the crew chief looks over the maintenance requirements, planning the inspections and repairs or replacements of parts. Each field crew carries a full library of maintenance manuals and maintains a precise log of flight time and repair work. “Our crews know that the helicopter has to be up and flying the next morning,” says Koehnke. “We’ll have mechanics out there all night if necessary. I can’t tell you how many nights I’ve worked outside in the rain to make sure the helicopter was ready to fly in the morning.”

Aircraft maintenance outside of the U.S. is essentially the same as working stateside, but also requires exceptional communication channels, keen awareness for shipping times and super flexibility necessary when working on the opposite side of the world from the company’s headquarters. Again, the largest single issue for overseas maintenance crews is logistics. Because of the delays in shipping and customs, Columbia’s crew chiefs must work with the company’s project managers to estimate anticipated aircraft usage, since increased flight time can reduce the number of days available for shipping. “Some of the consumables we use are available here in Peru,” says Parcel. “For just about everything else, I send my parts requests for a part or component about 250 flight hours before I’ll need it.”

The larger supply of spare parts for overseas crews helps to minimize the potential for downtime while also simply reducing the number of spare parts needed for aircraft working away from home. Currently, Columbia operates multiple aircraft in Peru, Papua New Guinea and Canada, so chances are good that if one crew doesn’t have a needed spare that the other crew might have it in stock. While life-limited parts are generally the easiest to track and order, the company generally plans for at least two weeks for shipments to reach the field crews. This typically allows enough time for packing, shipping and clearing customs.

Working from an airport now named for Lematta, Columbia’s maintenance facility is home to approximately 300 maintenance technicians. While many of the employees work directly on parts and components in one of the company’s many shops, the focus is always to keep the field aircraft in the air. “We acquired the Type Certificates for both of our aircraft several years ago,” explains Koehnke. “We’ve also acquired a production certificate which allows us to manufacture spare parts. This has enabled us to become nearly self-sufficient as far as maintenance goes.

“Our maintenance facility includes shops for working on engines, transmissions, rotor blades, rotor heads, sheet metal, hydraulic parts and components, avionics and electronics as well as a machine shop, NDT lab, composite shop and paint facility. The company also operates its own test cell for ensuring engines are running up to spec before they are shipped to the field.

“Our shop crews are continually working on parts and components for every aspect of our helicopters,” says Koehnke. “While they are usually working on just general work orders, they can drop everything to focus on getting necessary parts out to the field as soon as possible.

“We know that we use our helicopters to do a lot of hard work,” says Koehnke, “but with our FAA-approved maintenance program and our outstanding people in both the shop and the field, we know that we’re going to be able to continue using these same aircraft for years to come.”

Dan Sweet has worked as public relations manager for Columbia Helicopters for nearly 17 years, following the company’s aircraft from their headquarters near Portland, Ore. Prior to joining Columbia, he served for eight years as a Navy journalist