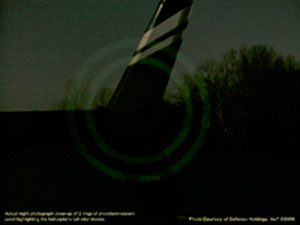 Andover, Kan. – A new, “glow-in-the-dark” safety coating system is now available for the first time in the civilian aviation market. AfterGlo® Photoluminescent Paint Kit AG110, a photoluminescent coating system, makes the tips of aircraft propeller blades and helicopter main and tail rotors visible in dark and low-light operations, increasing the awareness and safety of nearby personnel in hangars, airstrips, helipads and repair facilities. The coating system was developed under a U.S. Naval Air Systems Command contract as a joint development between Sherwin-Williams Aerospace Coatings and Defense Holdings Inc. (DHi) for use on aircraft on Naval carriers.

The AfterGlo® coating system is applied to the tips of aircraft propeller blades, helicopter main and tail rotors, and other rotating objects to allow personnel to avoid injury by inadvertently coming into contact with them in low light situations. Components with the AfterGlo® coating  “charge” in the sunlight and deliver, in the dark, a steady, eight-hour glow that’s visible from up to 40 feet. The three-part system also provides excellent hardness and impact resistance. It is typically applied using a HVLP gravity feed gun.

DHi developed the special photoluminescent pigment for the three-part coating system, while Sherwin-Williams Aerospace developed the paint process and manufactured the product.  The system includes a white polyurethane basecoat, followed by the photoluminescent (PL) layer topped with a clearcoat. The coating system is designed for improved visual acuity of stationary and rotating objects in night and low-light operations.

“During night-time operations, when propeller-planes prepare to take off, flight deck personnel on Navy aircraft carriers often are unable to see or hear the rotating propellers because they are potentially distracted by noisy, high tempo flight operations,” says Rich Martin, president of Defense Holdings Inc. “The Navy charged small businesses through its Small Business Innovative Research (SBIR) program with developing a product to increase rotor and propeller visibility and ensure sailor safety on aircraft carrier decks. An added benefit is that the paint doesn’t affect the use of Night Vision Goggles.”

DHi won the Navy’s sole contract for its photoluminescent paint in 2004. By 2005, it had tapped Sherwin-Williams to manufacture the coating on a large scale. After years of lab and flight-testing, the Navy adopted and certified the paint in May 2008.

“Sherwin-Williams has immense experience in the aviation market and already was a qualified supplier to the Navy,” Martin added. “The company had the resources and know-how to make this work.”

According to J. Marc Taylor, Sherwin-Williams Aerospace Director of Sales, the move into the civilian market is a natural one. “Propeller-driven planes are common throughout general aviation, as are helicopters, which is another excellent application for AfterGlo®,” he says. “AfterGlo® has much potential to improve safety at airports and helipads by increasing visibility of potentially hazardous moving parts in operations with little or no light.  While it does provide a visible safety mechanism when the aircraft is on the ground, the glowing propeller tips do not interfere with pilot visibility in the air because the glow is visible only from distances less than 40 feet away. This plays an important role in military applications, too, as it means enemy planes cannot see the paint glowing while the aircraft is in flight or on the decks of a carrier.”

According to DHi’s Martin, the patent for the photoluminescent paint, U.S. Patent 7,326,435 for Low Light Level Illumination for Rotating Objects, covers any rotating objects. Aircraft propellers and rotors are just one use. “The future possibilities are many and widespread, from wind turbines to industrial fans and beyond,” Martin says.

For more information on the new AfterGlo® Photoluminescent Paint Kit or other Sherwin-Williams Aerospace Coatings, call 1-888-888-5593 or visit www.swaerospace.com.