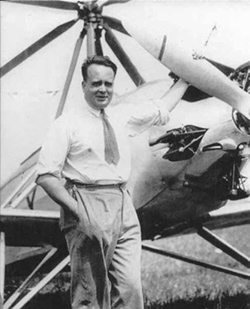 “[Mr.Cierva’s invention has] four blades which revolve above the pilot’s head. When these are going fast enough for a flight, they constitute a round wing.  The autogiro sails along on a large pie plate, so to speak. These craft may seem less of freaks than they look.”

The autogiro is considered to be a major breakthrough in helicopter development due to the first successful application of autorotation. Nevertheless, from the very beginning, this half-airplane, half-helicopter has been given unflattering nicknames. Many called it a “flying windmill,” and others, an aviation “freak.” Should you search the internet you will quickly discover that it also has two spellings: “autogyro” and “autogiro.” The proper name, autogiro, is derived from Spanish and the original theory of autorotation is attributed to inventor, Juan de la Cierva y Codorniu [1895-1936] of Spain.

Cierva was wealthy and well educated. As a teen, he and friends built the first powered aircraft to fly in Spain. His chosen profession was civil engineering, and he was briefly associated with future dictator Francisco Franco during the Spanish Civil War. His concept for an autogiro was a result of his goal to perfect slow take off and landing capabilities of military fixed-wing aircraft following WWI. By 1919, he had documented his theories and made scale models of his invention. Between 1920 and his death in 1936, Cierva designed and constantly modified and improved full-scale autogiros, numbering them “C1” through “C30.” From the beginning, all of Cierva’s designs included a standard airplane fuselage, often minus wings, but retained a nose engine and propeller. To a mast or pole he added rotor blades; these were not connected to a power supply and drooped motionless, high above the cockpit. The first three designs were unstable for flight, but demonstrated autorotation while ground taxiing.

This simple achievement was monumental. Historian Warren Young wrote that “La Cierva’s genius lay in his ability to understand that the same forces that acted on a fixed wing would also act on rotating wings. And although these forces were well known — lift, drag, thrust and weight — it was his application of them that would be so novel.”

Cierva’s method for setting the motorless rotor blades in motion prior to takeoff seemed simplistic for a genius, but it worked. Like a giant wind-up toy, a rope was wound around the moveable base of the blade and then stretched taut for 20 or 30 feet in the grip of five (or more) strong men waiting for the signal to pull. Once the autogiro’s engine was ready for takeoff, a man-against-machine tug-of-war twirled the rotors upright, the rope dropped off, the dust flew and volunteers scattered. The blades that previously looked like a broken umbrella now blurred into what Amelia Earhart described as a “large pie plate.” 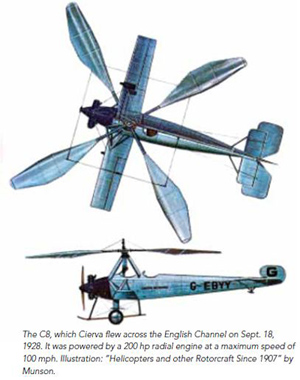 Once Cierva solved the problem of proper blade angle, flexibility and size, he was able to convince a Spanish Army flier to make the first successful test flight piloting autogiro C4 in 1923. By 1926, Cierva’s aircraft (model C6) had captured the imagination of James G. Weir who offered to finance the Cierva Autogiro Company, Ltd., in England. With his development and manufacturing now based in Britain, Cierva’s first sales were for military use in Europe. In 1927, the C8 emerged with Cierva at the controls. In the fall of 1928, he became the first to pilot a rotorcraft across the English Channel. 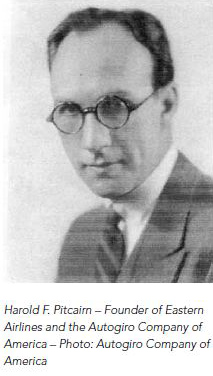 Pitcairn and Cierva continued to modify and improve the autogiro so that no crew was required at takeoff. The C19 offered an automatic starter, and by 1931, Pitcairn enclosed the fuselage for his Eastern Airlines mail route autogiro.

Historian Young observed that the autogiro was “one of the few bright spots in the gray times of the Great Depression. Its unique feats amazed people, and the still-unperfected helicopter was all but forgotten.”

In 1931, Pitcairn’s chief test pilot, James Ray, landed an autogiro on the lawn of the White House where President Herbert Hoover then presented Pitcairn with the Collier Trophy for establishing the autogiro in the U.S.

That same year, the allure of the amazing, curious, new aircraft also attracted aviatrix Earhart (who set the autogiro altitude record of 18,415 feet). Seizing the opportunity for a flying advertisement, the Beech-Nut Packing Company purchased a Pitcairn autogiro, painted it the same color as their gum wrappers and hired Earhart to make three cross-country tours during the summer and fall of 1931. She called the green autogiro her “flying bill-board.” She later wrote, “Like a bird it can settle to earth and stop — with no roll at all on the ground.” A passenger Earhart once took up described it by saying, “Well, she lands just like a turkey buzzard.” 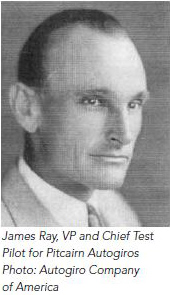 With Earhart at the controls, she and her mechanic, Eddie de Vaught, took off and landed as many as 10 times every day.  Author Doris Rich described their aircraft as a “fragile grasshopper leaping its way across the country.” Her grammar school-age step-son, George Palmer Putnam Jr., became the youngest passenger in an autogiro when Earhart invited him to accompany her for a short flight in New York. Now in his eighties, Putnam recalls that when Earhart landed near Armonk/North Castle, he had fun giving away samples of gum. “I tore off pieces of gum from a long strip and handed it to the waiting crowd,” says Putnam. “It wouldn’t be allowed today.”

Direct controls for rotor tilt were perfected on Cierva’s Model C30 between 1933 and 1936 — but equally significant was the autogiro “jump-start.” By increasing the power of the rotor engine, the fast-spinning blades lifted the aircraft off the ground. Helicopter expert Kenneth Munson noted that in 1936, the “C30 made the first genuine vertical takeoff by an autogiro by keeping the engine and rotor system engaged throughout the takeoff sequence.”

The autogiro seemed limitless in applications for fire and police departments, survey, advertising, crop dusting and other nonmilitary uses. Avro created an autogiro floatplane in Britain. In 1936, Pitcairn built a “road able” autogiro prototype that landed in Washington, D.C., and then “putted through the streets” like a car.  Pitcairn’s colorful sales brochures depicted takeoffs and landings from a front lawn and folding rotor blades so that the autogiro could be parked in the garage next to the family car. Pitcairn ads suggested the autogiro was safe enough for a child to fly, but professional autogiro pilot Blanch Noyes and other experiences aviators openly disagreed, citing numerous accidents.

Approximately 500 autogiros of various forms were built in Japan, Europe and the U.S. and sold around the globe. Upon Cierva’s death in a commercial airline accident in 1936 at the age of 41, further development of the autogiro faded. During the gloom of the Great Depression, without military, commercial or private sales, Cierva, Pitcairn, Kellett and other autogiro manufacturers soon went out of business.

Despite its crowd pleasing flights and adaptability, Young called the autogiro an “economic and technological misfit.” But he conceded that “by solving the autogiro’s problems one by one, Cierva and his colleagues had opened the way at last for the practical helicopter.”