Historically, flying a helicopter has always been a challenge. From its beginnings some 70 years ago, flying a helicopter required a high degree of skill and constant attention. Even in the best of weather, in broad daylight, lacking either or both could be catastrophic. For all practical purposes, night flight and instrument flight were impossibilities. Not any longer. Since that time, vast improvements in basic helicopter design and avionics have occurred, making even single-pilot instrument flight rules (SPIFR) a reality while realizing major benefits, including greatly increased safety and expanded mission utilization of the helicopter. Automatic flight control systems for helicopters have made these things possible. 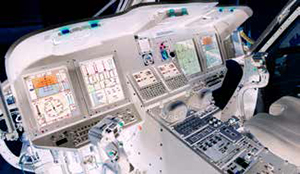 In today’s market, a widening array of systems is available for many helicopters currently in production. These systems might be simple, hands-on visual flight rules (VFR) systems or they might be highly sophisticated, combining stability augmentation, autopilot/yaw damper and flight director functions into an automatic flight control system capable of a hands-off mark-on-target approach to hover. These advanced systems rival anything offered in the fixed-wing world. As usual there are a number of acronyms such as AFCS, DFCS (digital flight control system), DFGS (digital flight guidance system). Regardless of the acronym, most of these systems do pretty much the same things. With the growing application of helicopter AFCS, a fundamental understanding of these systems is now required in order to maintain them in airworthy condition.

In comparing a rudder to a tail rotor, the tail rotor opposes main rotor torque. Both the rudder and tail rotor provide aircraft directional control and both are used in yaw damping and turn coordination.

Most fixed-wing aircraft are inherently stable. Place the airplane in the desired position/attitude, take your hands off the control column and it will fairly well stay there. The same cannot be said of helicopters. They are inherently unstable flying platforms. Helicopter pilots are taught from day one not to take their hands off the controls (cyclic, collective and pedals). This is sometimes a problem for pilots transitioning to top tier, sophisticated helicopters where hands-off flying is the norm.

In fixed-wing aircraft, power is controlled by the throttles (aka “power levers” in turbines), and an increase in power yields an increase in airspeed.

In order to better understand what autopilots/yaw dampers, flight director systems and stability augmentation system (SAS) are supposed to do, let’s define their functions and take away some of the mystery surrounding them. Since the flight director system can usually be flown separately from the autopilot/yaw damper or coupled to it, let’s start with it. What follows is general in nature and not tied to a specific helicopter model or avionics manufacturer. 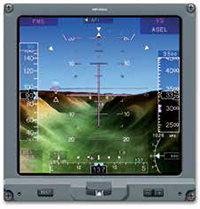 The flight director is divided into four basic parts

The sensors provide the raw data to be processed by the computer. The flight director mode selector (controller) tells the computer which raw data to use, depending on pilot mode preference. The computer processes the raw data and gain scales the information to be displayed on the ADI/EADI command bars and/or to the autopilot.

For the flight director to compute a steering command, the following has to be considered:

•  What is the pilot’s desired helicopter lateral and vertical navigation position?

•  What is the helicopters actual lateral and vertical navigation position?

•  If there is a difference between the desired and actual position, the FD produces a command to correct for the difference and control the speed at which the correction takes place. 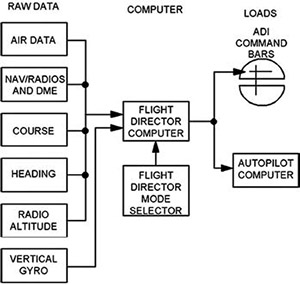 Autopilot (AP): As complex as some of today’s autopilot systems have become, they all can be narrowed down to providing at least one main function — stability. In essence, the autopilot takes care of the routine repetitive tasks and allows the pilot the ability to concentrate on other flight concerns.

Today’s helicopter autopilots can be three-axis or four-axis systems. A three-axis system provides pitch, roll and yaw axis stabilization around the pilot’s desired attitude and heading reference. In a four-axis system there is also a collective axis, where the autopilot provides collective (i.e., power) control.  These systems are considered to be limited authority systems in that for short-term external disturbances, the cyclic control does not change position. For long-term disturbances (i.e., change in CG or fuel burn), the cyclic control is allowed to move to a new position that extends the authority of the autopilot.

To accomplish this, the autopilot system must detect changes in helicopter attitude and respond to those changes more quickly and smoothly than its human counterpart. 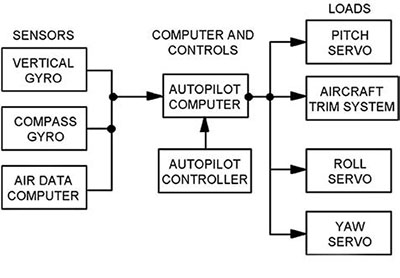 For an autopilot to maintain this stability, it must:

•  Correct for the difference (error) and

•  Control the speed of the correction.

What is needed for both autopilots and flight directors to do their jobs is almost identical. The difference lies in what data the two systems are using. In the flight director it is navigation position data, and in the autopilot/yaw damper it is helicopter pitch and roll attitude.

The yaw damper damps or reduces the rolling and yawing oscillations due to the aircraft’s tendency to Dutch roll. Dutch roll is a type of aircraft motion consisting of an out-of-phase combination of roll/yaw “tail-wagging” and rocking from side to side. The yaw damper computes servo commands based on sensor input data only. It supplies yaw rate damping and makes no input or control to the flight director. It also helps turn coordination through the autopilot.

In some systems, the yaw damper can be engaged without the autopilot, but this is unusual. Servo position reference is synchronized to zero at engagement and is constantly washed out to ensure that steady state rudder/tail rotor forces are zero.

When the SAS mode is engaged, it supplies short-term attitude and attitude rate stabilization for use in hands-on flying. It is referred to as an SAS because it stabilizes the helicopter against outside disturbances, and augments or helps pilot cyclic control input. The SAS mode is designed so that pilot controlled motions (pitch and roll) are enhanced while helicopter motions caused by outside disturbances are counteracted. This mode of operation improves basic helicopter handling qualities.

When helicopter motion (a wind gust) is detected, a stabilizing control signal proportional to the amplitude and rate of the motion is generated in the AFCS computer and routed to the appropriate actuators. SAS is generally used during low and slow maneuvering where the pilot might be making constant attitude changes in preparation for landing. By design, SAS is to be flown hands on, and depending on the manufacturer of the SAS, flight director modes might or might not be flown while SAS is engaged.

When the pilot is flying the helicopter manually, his or her muscles move the cyclic, collective and the pedals through a series of cables, bellcranks, linkages and either an electromechanical or hydraulic powerpack that provides an input command to the main and/or tail rotors.

With the AFCS engaged, servos (either rotary or linear actuators) are connected in parallel or series to the cables, linkages and bellcranks, and provide the input to the powerpack to drive the main and tail rotors. 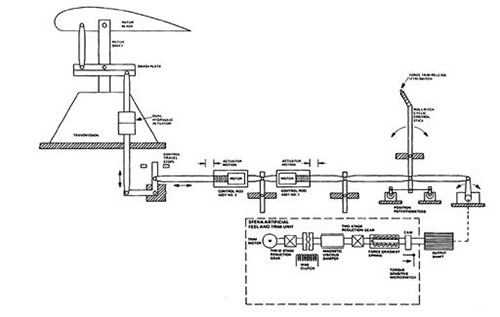 Above is a simplified illustration of a cyclic (pitch and roll) control system with dual AFCS linear actuators. The cyclic is held is position by a force gradient spring inside an artificial feel and trim unit (aka a rotary trim servo). This is called a fly-through system in that the pilot still has full cyclic control regardless of autopilot or SAS operation. When the autopilot is flying the aircraft (with or without flight director), the linear actuators extend and retract as required to maintain the desired attitude during hands-off operation. As previously stated, the stick does not move in this series linkage arrangement. During hands-on SAS operation, pilot inputs are sensed by the position potentiometers and sent to the flight control computers that output a tailored command to their respective linear actuators to yield an improved aircraft response. 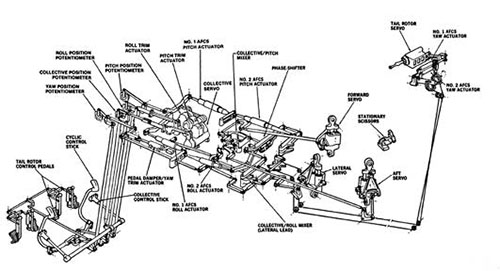 The drawing above shows a full four-axis AFCS system installed in a Sikorsky S-76. Note that the satisfactory performance of the AFCS is related directly to the maintenance practices applied to the interface between the AFCS servos (rotary or linear) and the aircraft’s basic control system. Poorly maintained linkage and/or control rigging results in perceived AFCS problems that are not the fault of the AFCS.

Attitude Hold (ATT) mode is used to maintain the helicopter’s pitch and roll attitude in a fixed position against transient short-term disturbances. This is flown with hands off the cyclic control.

Coupled (CPL) is flown with the autopilot in the ATT mode and a lateral and/or vertical flight director mode(s) engaged.

Depending on the system, SAS is a selectable mode of the autopilot (just like ATT). SAS is typically used with no flight director modes engaged. Pilots tend to use SAS when a lot of maneuvering is called for or during turbulence since the SAS mode smoothes out the response of pilot inputs or external disturbances.

Lateral modes are typically short-range and long-range navigation inputs. Vertical commands are primarily air data commands, with glideslope mode being a radio mode. Some of the newer model helicopters and their AFCS have a flight management system (FMS), which can provide lateral and vertical steering commands for the pilot, among other features.

There’s a lot more to learn, but there it is, a brief primer on helicopter AFCS. If you would like to get more information or to go deeper into these systems, send us your requests/questions and we will get back to you.

Paul J. Magno has more than 30 years experience in helicopter avionics certifications including AFCS and EFIS. He holds a Bachelor of Science degree in mechanical engineering and is also an FAA DER, instrument-rated pilot and A&P mechanic. He is the founder and president of Worldwide Helicopter Solutions LLC, based in Glendale, AZ. For more information, visit www.worldwidehelicoptersolutions.com.