From Wood to Composite Materials The Evolution of the Rotor Blade

Walking through the hangar, looking up at the rotor system of the helicopter I maintain, I often think back to the early times of helicopter development. In the early days of aviation, airplane wings were constructed of wood and fabric because this was the technology of the time. These materials served the industry well enough for many years. When it was time to build rotor blades for the first helicopters, the designers didn’t know how to construct them, so it is not surprising that rotor blades were constructed similar to the wings on airplanes.

Like airplane wings, early rotor blades had a main spar, ribs and a covering of fabric. The blades were symmetrical because this shape offered a good lift-to-drag ratio and a stable center of pressure, and they were easy to build. This was to be the design and shape of rotor blades for many years. The early blades were a blend of several types of wood, each adding properties the other materials lacked. 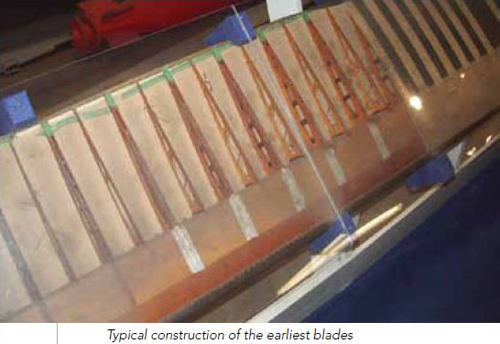 Wood is an excellent material for airfoils because it has no known fatigue life. The first rotor blades had a rather stout spar usually made of Sitka spruce, vertical laminates of birch that offered good impact resistance, and balsa wood for the afterbody which really didn’t work that hard except for maintaining the shape of the airfoil. These blades were covered in fiberglass and sealed with aircraft dope, much like an airplane wing. There was also a metal leading edge abrasion strip bonded to the blade, since fiberglass and wood have little erosion resistance.

Combining different materials that offer different properties not present in the others results in what is called a “composite” structure, and this idea remains very much in use today.

Building wood blades required patience and excellent carpentry skills. All were hand shaped using templates, and were made in sets that were destined to fly together forever because wood from the same lots was matched to its mate during manufacture. I love telling pilots that all rotor blades are held together with glue and watching some of them get nervous. The first wood blades were made with waterproof resorcinol wood glue that was mixed from powder and syrup components and cured at room temperature.

Bonding stainless-steel leading edge abrasion strips required a hot bond to achieve maximum strength. The heat of bonding would have destroyed the finished afterbody, so the problem was solved with the use of what is called a “composite” bond that is described below

The leading edge abrasion strips were first manufactured in flat strips and cut to length. Then a thin mahogany veneer was bonded to the inside of the abrasion strip under high heat and pressure, much more than the blade could stand. The abrasion strip was then formed to fit the blade, and it was then possible to do a wood-to-wood bond with waterproof resorcinol glue at room temperature. This process of composite bonding is still very much in use today.

Early on, there were some problems with the wooden blades. Even though they were called “infinite life” or “on condition” blades, they could be damaged beyond repair. They always flew as sets that were matched to each other during the manufacturing process. If you scrapped one, you scrapped both of them. They also absorbed water, and if one blade absorbed more than the other while the helicopter was parked outside, the resulting lateral vibration made things interesting at startup.

Because of these problems, metal blades began to appear. This allowed a user to replace individual blades instead of the whole set. This certainly made life easier for the operator if he or she damaged a blade. Also, these metal blades came with a design life that made replacement mandatory after a certain number of flight hours. A big disadvantage came when a metal blade was damaged or cracked in a critical area; it could experience a catastrophic failure with little warning. The introduction of honeycomb in-blade construction allowed designers to incorporate more desirable shapes into rotor blades that increased performance. The combination of metal skins bonded to honeycomb provided great beam strength. The metal blades were a forward advancement, but construction methods available at the time limited design progress considerably. 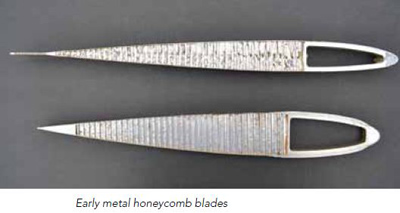 When the first non-metallic blades appeared with fiberglass skins and foam or Nomex honeycomb core, they offered something that had not been available before: a non-catastrophic failure mode. This is very desirable in a single load path structure. Whereas the older metallic blades would crack around a nick or damage, sometimes failing suddenly, these newer blades would give plenty of warning if they developed problems. Metal skins act somewhat like aluminum foil and tear easily. With a crack having no reason to stop, it could grow very quickly, sometimes failing the blade.

With fiberglass skins, each cross fabric resists crack growth like trying to rip the fabric of a shirt. What results is a non-catastrophic failure mode which gives visible indications of the damage or warns the pilot with a gradual increasing vertical vibration. 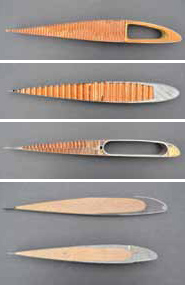 Complex shapes were now possible since blade shapes could be molded and cured in a custom mold. Non-symmetrical shapes became common and swept tips helped reduce mach numbers at the tip.

The British Experimental Rotor Program (BERP) introduced a main rotor blade with an extended swept leading and trailing edge that allowed a Westland Lynx to establish the absolute helicopter speed record of 249 mph in August 1986. This blade design solved the problems of compressibility at the tip of the advancing blade while relieving the stall on the retreating blade.

The limiting factor in the top speed for a helicopter has always been retreating blade stall. As the helicopter speed increases, the advancing blade gains more lift and the retreating blade loses more lift. All helicopters have a top speed and weight combination where in forward flight the retreating blade cannot support its side of the rotor disk, resulting in a retreating blade stall. Unless corrective action is taken, the helicopter will roll in the direction of the retreating blade, usually with a strong pitch up moment that will greatly increase the pilot’s anxiety level and give him or her a strong incentive to slow the aircraft. If this happens, the best corrective action is to reduce blade angle and power by lowering the collective lever, reducing airspeed and increasing rotor rpm to the maximum limit. Moving the cyclic forward or making any anti-torque inputs complicates the recovery. The BERP blade shape gives much improved performance with little weight penalty. 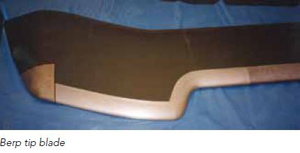 Helicopter blades are characteristically single load path structures. If you were going to design a blade capable of withstanding combat damage, it would be necessary to have a multiple load path design such as the blade on the Apache helicopter. The AH-64 Apache blade has four spar sections which prevent the blade from failing if it is hit by ground fire. Each spar section is designed to help carry the load if the others are damaged.

From time to time I get calls from people asking if we have any rejected main rotor blades that could be used for wind machine fans they are building for power generation. I quickly try to discourage this idea because helicopter blades are notoriously bad for wind machines. Wind machine blades are designed to be high lift devices able to be started with low wind speeds.

The most frequent requests we received were at the beginning of the push for wind power in the early 1980s, when substantial tax credits were offered to wind-generating power companies with operating towers. These requests most often came around tax time when it was necessary to show a tower with blades on it, and the blade manufacturers were not able to keep up with production. Many UH-1 main rotor blades were installed on wind machines to show to the IRS to qualify for tax credits given to investors in this new industry.

SHAPES OF THE FUTURE

There has been a lot of discussion in the past about designing a helicopter that would avoid high-speed problems by stopping the rotor in flight. This concept, though unique, presents its own set of problems when the blade trailing edge becomes the leading edge once each rotation. We are all used to the conventional airfoil shape of blunt leading edges and sharp trailing edges on a blade, but this shape would cause predictable problems when the trailing edge is presented to the front of the aircraft when the rotor is stopped in flight. What about designing a blade that has identical blunt leading edges and trailing edges? Stopping the rotor wouldn’t matter to the blade because the airflow would always encounter a rounded surface of the blade and not try to do anything weird.

Conventional control of lift involves changing the pitch of the blade by actuating pitch links through the swashplate — but how do you control the lift on the blade shape on the right? This can be accomplished by using the Coanda effect that involves pressurizing the inside of the blade and directing compressed air through small ports located on the leading or trailing edges of the blade. The air directed through the trailing edges pushes the blade forward like a lawn sprinkler. This additional airflow raises or reduces the lift of the blade as necessary. This process can also eliminate the need for anti-torque systems because there is no torque generated by accelerating the blades in this manner.

A current goal of Defense Advanced Research Projects Agency (DARPA) is to use adaptive or “smart” materials that adjust the airfoil shape to reduce rotor vibration. This project uses piezoelectric devices in the form of plates that work like small actuators on the trailing edges of the blades that respond to sensor signals. It is calculated that significant reductions in vibration and noise would be attained.

Given the advancements in helicopter design, one can only wonder what is coming next and what I am going to see when I next look up at the rotor system. I can hardly wait.

Dana started working aircraft maintenance in the United States Air Force in 1959, turning wrenches on B-52 Bombers. He holds an FAA repairman certificate on rotor blades and also holds ground instructor certificates for basic, advanced and instrument ratings. Dana has been a chief pilot instructing in airplanes and helicopters since 1970. He has been active in blade repair since 1981 and is currently vice president of International Aviation Composites Ltd in Fort Worth, Texas. Dana has been teaching rotor blade preventive maintenance at FAA IA Refresher clinics for 10 years.