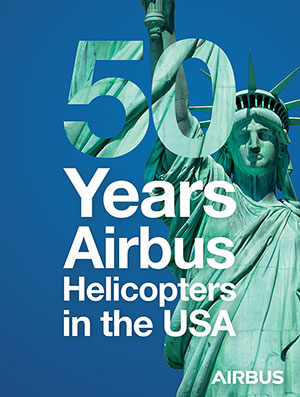 “For 50 years, our customers and the local communities in which we are based have relied on us as a strong partner for advancing the aviation industry in North America,” says Chris Emerson, head of the North America region. “This represents 50 years of experience, expertise, customer experience, innovation and technology — a strong foundation that has secured our leadership position today and that will prepare us for success in the next 50 years.”

Airbus Helicopters Inc.’s operations began in the U.S. in 1969 with the establishment of Vought Helicopter, Inc. in Texas, which France’s Aerospatiale took over in 1974. The company opened the doors to its current facilities in Grand Prairie in 1980. Airbus Helicopters Canada traces its roots to MBB Helicopter Canada Ltd., founded in 1984 in Fort Erie, after successful negotiations between MBB Helicopters, Fleet Aerospace, and the Canadian and Ontario governments.

After a series of product development, sales and delivery milestones, the two companies took on the Airbus branding in 2014 and now comprise a regional organization, Airbus Helicopters North America, which will be celebrating the milestone anniversaries with events and campaigns throughout the year.