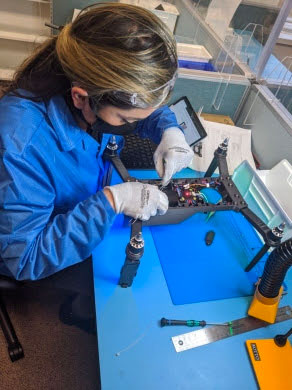 Last year, AD signed exclusive U.S. manufacturing, sales and distribution licensing agreements with Drone Volt (ALDRV.PA), a French drone manufacturer of professional civilian drones. AD also entered into a strategic partnership agreement with Drone Volt and Aerialtronics through a 10% stock/equity swap with these entities. Under the terms of a five-year deal with Drone Volt, Aquiline Drones becomes the sole manufacturer of the Pensar smart camera — a multispectral sensor, complete with artificial intelligence and edge computing capabilities, along with manufacturing the above-mentioned drones.

"Growing data-security concerns over foreign-manufactured technology, mainly from China, has created an immediate need for increased drone production capacity in the United States," says Barry Alexander, chairman and CEO of Aquiline Drones. "Our goal is to not only position our country as a leader in the multi-billion-dollar global drone industry, but also to reestablish America's manufacturing dominance. This is in perfect harmony with our company’s powerful strategic vision of making Connecticut the drone capital of the nation.”

Alexander notes that AD now has a team of twenty-five technicians working in its new 7,000-square-foot, state-of-the-art, drone manufacturing and assembly lab. This manufacturing team projects to double in the coming weeks to address the rapidly accelerating market demand for American-made drones.

Amid the pandemic, AD has employed several of its new manufacturing employees with the support of Capital Workforce Partners (CWP), a Hartford-based workforce organization with a statewide reach dedicated to helping businesses find, retain and grow the most qualified talent. CWP helps adults develop skills necessary to thrive in the state's job market and directs them to employers seeking those talents.

Another highly effective platform utilized in identifying new employees was CT Hires, an online employment service hosted by the State of Connecticut Department of Labor. Besides receiving in-bound applications and resumes, CWP and CT Hires have been essential tools for AD's hiring efforts. According to Alexander, "We are only as successful as the community which sustains us, and while we are in the process of changing the drone landscape on a global level, we are particularly committed to efforts supportive of our local community in whatever capacity necessary."

AD occupies 15,000 square feet in the Stark Building, a historic architectural landmark located in Hartford's financial district. The company is now constructing a street-level showroom and retail store for drones and sensors, as well as maintenance, repair and overhaul (MRO) of various drone models. To address the economy's growing demand for commercial drone technologies, AD's company-wide manufacturing expansion plans include:

"To quickly scale our commercial drone production capacity, our team decided to consolidate all manufacturing operations at our downtown Hartford headquarters to avoid the logistical challenges of managing a separate facility," explains Alexander. "Safety and performance are key areas of focus in the UAV industry, and this process enables us to maintain stringent quality-control throughout the production cycle."

Igniting the spark to build a new drone manufacturing ecosystem in the U.S. was The American Security Drone Act of 2019/2020, legislation co-authored by Connecticut Senators Richard Blumenthal and Chris Murphy. This development paves the way for U.S.-based drone manufacturers — such as Aquiline Drones — to enter a red-hot industry growing at 13.8% annually. According to the FAA, drones represent the fastest-growing segment in the entire transportation sector.

AD’s new venture also comes on the heels of the U.S. Department of Justice's (DOJ's) announcement on October 9, 2020, officially banning the use of DOJ funds to purchase or operate any drone from 'covered foreign' countries. China is estimated to originate more than 70% of the global share of commercial-off-the-shelf (COTS) drones.

"We are delighted to be establishing ourselves as the domestic manufacturer in this terrific industry — building an entire drone ecosystem, pushing the limits of technology development and delivering useful capabilities, previously imagined, but never before seen," says Alexander.