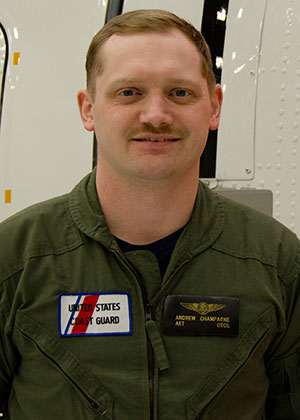 Helicopter Association International (HAI) announces U.S. Coast Guard Avionics Electrical Technician Second Class Andrew Champagne as the first recipient of the Salute to Excellence Matthew S. Zuccaro Land & LIVE Award. The award recognizes aeronautical decision-making, crew resource management, and coordinated actions by flight crews that result in the decision to terminate a flight before an accident could occur. The award will be presented March 7, 2022, at HAI HELI-EXPO 2022 in Dallas, TX.

USCG AET2 Andrew Champagne joined the Coast Guard with a desire to save lives. Since joining the service in 2011, he has made a lasting impact on countless lives, including those of his own crew. Stationed at Coast Guard Air Station Cape Cod in Massachusetts, Champagne is responsible for maintaining the electrical systems of all the station’s Sikorsky MH-60T Jayhawk aircraft. As part of his training, he attended vibration-analysis school for the aircraft’s systems. For rescues, Champagne also serves as a flight mechanic, a member of the flight crew working the hoist and with the rescue swimmer and pilots.

Early in the pre-dawn morning of June 8, 2021, Champagne’s rescue crew was dispatched to support a search near Boothbay Harbor, ME, more than 175 miles away. Local conditions were 300 feet with visibility down to half a mile with mist. Due to the distance and IFR conditions, the crew elected to load the full 5,800 pounds of fuel onboard, filling all three of the aircraft’s external tanks. Shortly after takeoff, Champagne began to feel a vibration in his seat. It wasn’t immediately obvious where the vibration initiated. After ruling out his seat as the source, he announced an abnormal vibration. No other crew member felt it, yet the aircraft commander immediately asked if Champagne felt the flight should be aborted.

“I could barely see the runway lights, so I knew we were close to where the clouds were starting,” Champagne recalls. “If we waited any longer, we’d need to climb and follow IFR procedures to return to the airport. That would put us over densely populated areas and extend the flight, increasing the chances something could go wrong.”

Champagne called for the abort without hesitation. Once back at the hangar, he inspected the aircraft. When he reached the left inboard external tank, he was able to move it back and forth. It was loose and, with a full load of fuel, could have easily come off the aircraft. He and his crew immediately realized the potentially catastrophic situation they’d narrowly avoided. Had the 120-gallon tank come loose in flight, it would have landed over a populated area and could even have caused the aircraft to crash.

“The biggest thing we’ve all taken from this experience is no matter what you feel, see or smell, it’s so important to speak up,” Champagne says. “A lot of people will second-guess themselves or are afraid to speak up, and that’s when accidents happen. We’re fortunate to have a culture in the Coast Guard where any of us can decide to abort a flight, and it’s never questioned. Maybe it’s nothing. But what if it was something?”

Thanks to Champagne’s bold and concise actions and directions during takeoff, the crew averted a potentially deadly situation. His actions and the culture of the U.S. Coast Guard to trust and follow any crew member’s call to abort illustrate the value of former HAI president Matt Zuccaro’s program, Land & LIVE.

The Matthew S. Zuccaro Land & LIVE Award will be presented to Champagne during HAI HELI-EXPO 2022, the world’s largest helicopter trade show and exhibition, held at the Kay Bailey Hutchison Convention Center in Dallas, TX, March 7–10. The exhibit hall will be open March 8–10.