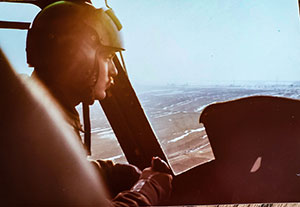 Aviation Specialties Unlimited, Inc. (ASU) announces that ASU president, Jim Winkel, will retire at the end of 2020. Winkel has served as the president of ASU since September of 2013, and his remarkable career in the night-vision industry has spanned nearly four decades.

"Some of the greatest memories I have during my time at ASU is the outstanding friends and colleagues whom I've been privileged to work and form a relationship with," says Winkel. "My ASU family is replete with wonderful innovators, always focused on developing solutions for those whom we serve. I'll treasure the great community we have built as well — from the ASU soccer team to our annual retreat, and the many conversations we've had because of the trust and confidence we've built with one another."

ASU founder, Mike Atwood, hired Winkel as president. Atwood previously held the role for almost two decades. "Jim had a vast knowledge of the night-vision world, and his aviation background was a plus when we hired him,” says Atwood. "He has a tremendous amount of international experience and worldwide contacts gained from his previous employment. I knew him from past working relationships and knew he was an honorable and honest person. Through his leadership in the last seven years, ASU has grown, expanded and entered many new markets. Jim has been a stable force during the many challenges that ASU has faced over the years. We are thankful for his time at ASU and wish him the very best."

Winkel first began his distinguished career in NVGs in 1978 as a soldier for the United States Army. In 1982 he began flying with PVS-5 goggles. Before retiring from the Army in 1998, Winkel was flying all mission profiles at night — formation, sling loads, air assault —  using NVGs and with NVIS-compatible aircraft lighting. It was after he retired from the Army that he formed Moon Shadow Training and trained law enforcement pilots all over the United States.

In 1999, he joined Litton Industries full-time, now L3Harris. With Litton, Winkel was on the development team of the M949 aviation NVG. He also served on the RTCA committee as the co-chair along with Lorry Faber (of the FAA). Around a hundred industry and military experts from North America, Australia and Europe, including Atwood, labored together for nearly two years to develop the standards for NVG, NVIS lighting and NVG operations which have been adopted for use by FAA and civil-aviation authorities around the world. Winkel's influence on the world of NVGs has touched military, corporate and civilian operations worldwide.

Winkel and Atwood knew each before Winkel arrived at ASU. Their friendship and mutual respect impacted Winkel's decision to join ASU. "I believe that it took exceptional courage for the Atwoods to bring an 'outsider' into the company — in particular someone with an extensive corporate aerospace/defense background," says Winkel. "I had known and respected Mike since the late 1990s when he and I competed with one another in the NVG flight-training market. In early 2000, I got to know him very well when we worked together for nearly two years on the RTCA committee — whose efforts facilitate today the many cottage NVIS industries that support global aviation NVG flight. I first met Chris as she and Mike were considering becoming a distributor for a former company I worked with. Her talents are amazing, as is her perseverance and drive. Turning the reins over, after having 'poured every ounce of energy' (as Bob Seger crooned) for 18 years into 'their baby,' is not an easy thing for any business owner to do. I am grateful, Chris and Mike, for your mentorship, trust and friendship. I remember fondly the many evenings we spent 'cussin' and discussin' (as Mike Atwood says) after a wonderful meal at the Atwood home. Thank you both for inviting me to become a part of the ASU family and legacy. May God's provision continue to bless you."

Winkel, a father of nine kids, four in-laws, and ten grandkids, says he is looking forward to retirement. "I am looking forward to serving and enjoying the Lord in ways that more time will enable, and being a better husband to my bride, Sandy — getting to know her again. I will become active in more tangible ways with my children and grandchildren, and my parents, sisters, brothers-in-law and their families. Retirement will enable me to renew and maintain friendships, and more faithfully serve my church and our community.”