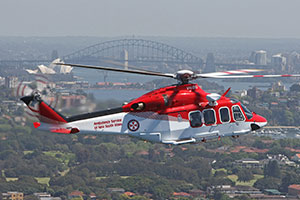 Helicopter Association International (HAI) announces that Australia’s New South Wales (NSW) Ambulance Service is the 2020 recipient of the Salute to Excellence Golden Hour Award. This award recognizes the efforts of an individual, group or organization that, through a particular activity or contributions over time, has advanced the use of helicopters in the vital mission of air medical transport.

In the 1980s, the NSW Ambulance Aeromedical Rescue Helicopter Service provided a patchwork of rudimentary capabilities across multiple providers. The organization operated successfully for three decades, but the group needed to evolve to ensure it could continue to provide the efficiency, capabilities and safety standards expected of a modern aeromedical service.

In 2012, the NSW government undertook an independent review that resulted in a 10-year strategic plan to ensure significantly improved patient outcomes for all residents and communities across the state. The review determined the plan could be achieved only by completely transforming the state’s contracting and services-delivery model for aeromedical support and by standardizing that model’s integration with NSW medical services. The ambitious plan would then require implementation by a strong team.

Ron Manning, the ambulance service’s director of aeromedical services, and Garry Sinclair, its head of helicopter operations, were true leaders and patient advocates who knew that such transformational change would require vision and courage. The plan would have to entail improved patient outcomes and integrated team training to support a holistic environment and safety above all else.

Today, NSW Ambulance (as the organization is now known) boasts the largest aeromedical helicopter capability within the southern hemisphere. From seven bases across the state, the service operates a standardized fleet of 12 Leonardo AW139 helicopters in identical aircraft and aeromedical configurations utilizing a common set of operational procedures and standards. The service ensures that NSW Ambulance helicopter doctors and paramedics can quickly reach patients in remote areas. Over 96% of the population of NSW is within one hour of a helicopter and its critical-care doctor and paramedic team.

Operating in a geographical region four times larger than the United Kingdom and slightly larger than the U.S. state of Texas, the service has flown some 17,000 hours in two-and-a-half years. During this time, it has conducted more than 10,000 critical-care missions at multiple sites, including canyons, crevasses, roadways, rivers, oceans, frozen lakes, cliffs and cruise ships. For each of its missions, the service’s average response time is less than 10 minutes by day and less than 20 minutes by night.

Central to NSW Ambulance’s focus on safety is the Aeromedical Crewing Excellence (ACE) Training Centre in Bankstown, NSW, which features a growing list of high-fidelity simulation assets, including:

The Golden Hour Award will be presented Jan. 29 at the Salute to Excellence Awards luncheon during HAI HELI-EXPO 2020. HAI HELI-EXPO, the world’s largest helicopter trade show and exhibition, will be held at the Anaheim Convention Center in Anaheim, CA, Jan. 27–30, with the exhibit hall open Jan. 28–30.