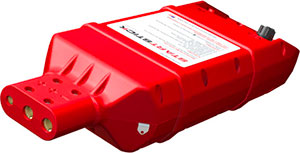 Weighing just 20 pounds with a compact form factor, the 20-Amp hour StartStick 20 allows ease of field and ramp operations, as well as maximum aircraft availability. Remote starts, avionics updates and compressor washes are accomplished with StartStick. The standard GPU/NATO power-port connector handles a range of aircraft, and each StartStick comes with an industry-leading comprehensive two-year warranty. For even greater redundancy, StartStick can be recharged either during flight, via onboard 28-volt connections, or later, plugged into a hangar wall socket. Its display provides constant on-condition data, including state of charge and other key annunciation.

“We are committed to helping aircraft owners and operators achieve maximum operational effectiveness,” says Todd Petersen of ABS. “Design and features mean our StartStick series of stowable start batteries is the best technology of its kind, in a lightweight, reliable package.”

Unexpected battery-related challenges are a field reality: a battery runs during a PR event; it fails due to age; it operates at the fishing lodge or stranding on a hospital rooftop. StartStick allows vital remote mission continuity. With nearly two thousand units in operation globally, StartStick portable power is peace of mind, providing multiple starts of single and twin-engine helicopters or fixed-wing aircraft before recharge.