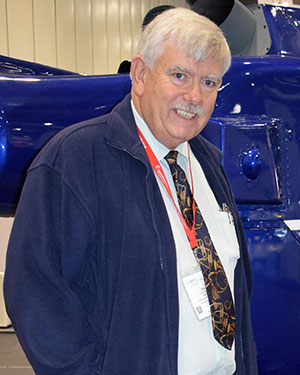 Helicopter Association International (HAI) announces that Bryn Elliott is the 2020 recipient of the association’s Salute to Excellence Law Enforcement Award. The award, sponsored by MD Helicopters, recognizes an individual or organization that has contributed to the promotion and advancement of helicopters in support of law enforcement activities. Nominees were not limited to pilots or law enforcement personnel.

Elliott served as a police constable for the London Metropolitan Police for 30 years, retiring from the force in 1996. Upon his retirement, he established Police Aviation Research, the parent company of Police Aviation News and the Police Aviation Conference (PAvCon) Europe. His efforts in the sector have connected public safety aviators in Africa, Asia and the Americas with their peers in Europe.

Elliott is responsible for the meticulously researched and compiled articles that make up Police Aviation News, often traveling to all corners of the world to gather information on helicopter usage in police aviation, search and rescue, and aeromedical transport. Each issue contains helicopter safety information, including accident and incident reports, that sometimes can’t easily be found elsewhere.

The primary goal of Elliott’s work is the sharing of ideas and resources, an endeavor whose impact on helicopter safety has been significant. As a direct result of his work, notable progress in helicopter safety has been made in such places as Africa, the Netherlands, Germany and Australia. Public safety aviation across the globe is safer thanks to the research, media and events Elliott and his company provide.

The Law Enforcement Award will be presented to Elliott at the Salute to Excellence Awards luncheon Jan. 29 during HAI HELI-EXPO 2020. HAI HELI-EXPO, the world’s largest helicopter trade show and exhibition, will be held at the Anaheim Convention Center in Anaheim, California, Jan. 27–30, with the exhibit hall open Jan. 28–30.