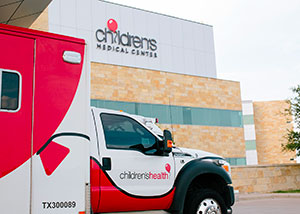 Helicopter Association International (HAI) announces that the neonatal/pediatric transport team at Children’s Health of Dallas, TX, is the 2022 recipient of the Salute to Excellence Golden Hour Award. The award recognizes the efforts of an individual, group or organization that, through a particular activity or contributions over time, has advanced the use of helicopters or UAS aircraft in the vital mission of air medical transport.

In the early morning of Aug. 10, 2021, a vehicle carrying two adults and five unrestrained children was traveling 65 miles northeast of Dallas, TX, when it was struck by a semi-truck. The vehicle rolled, severely injuring all occupants and ejecting at least one of the children. First responders on the scene alerted the local community hospital of multiple casualties and five pediatric patients with significant traumatic injuries. Unequipped for such a large patient load, especially children, the hospital’s emergency-room staff called Children’s Health Access Center to request support. Children’s Health operates 12 neonatal/pediatric-equipped ambulances, one Citation Encore jet, and one Sikorsky S-76C++ helicopter.

Children’s Health critical-care nurse, Brandon Gardner, RN, was standing by at the hospital’s airbase at Dallas Love Field when the Access Center’s team called. Gardner, his pilots and medical crew at the station sprang into action to devise a plan to transport all the children to Children’s Health, a Level I trauma center. It was agreed that Children’s Health would send an ambulance, helicopter and pediatric medical specialists to help assess, treat and transport the children to Dallas. Gardner and a paramedic immediately left in an ambulance with the intention of providing support in advance of the helicopter’s arrival. Before launching, the rest of the crew — medics, respiratory therapists and the two pilots — quickly reconfigured the helicopter to transport two patients.

Gardner and the paramedic arrived on scene first and promptly triaged, assessed and helped stabilize the children. Injuries varied from multiple lacerations to a pulmonary contusion and spleen laceration. Two children were identified as critical enough to require helicopter transportation. Gardner coordinated with the receiving emergency-department physicians at Children’s Health, reporting on injuries and priorities. The helicopter landed within 20 minutes of the ambulance’s arrival and the two most critical patients were loaded onto the aircraft. The Children’s Health ambulance transported a third child while the other two children were transported by local EMS services. In the end, all five children were safely and quickly transported to Children’s Health, where they eventually made full recoveries.

Children’s Health, based in Dallas, TX, is the eighth largest pediatric health system in the United States, transporting more than 5,000 children in 2021 alone. The transport team attributes its success to a philosophy of maintaining a variety of highly equipped transportation vehicles. All the hospital’s ground vehicles and aircraft are equipped to support critical needs. Onboard equipment includes nitric oxide, high-frequency ventilation, extracorporeal membrane oxygenation (ECMO), and TeleCooling and TeleTransport for NICU/PICU.

The specialized transport team at Children’s Health is accredited by the Commission on Accreditation of Medical Transport Systems and operates under the mission of making life better for children. On this day, and many others throughout the year, the team truly did make life better.

The Golden Hour Award will be presented Monday, March 7 during HAI HELI-EXPO 2022, the world’s largest helicopter trade show and exhibition, held at the Kay Bailey Hutchison Convention Center in Dallas, TX, March 7–10. The exhibit hall will be open March 8–10.