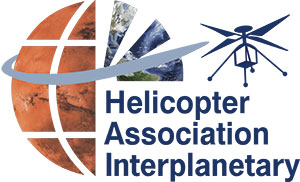 Helicopter Association Interplanetary (HAI) acknowledges the first successful flight of the Mars Helicopter, the first powered, controlled flight of any aircraft on another planet.

The tiny, four-pound rotorcraft, named Ingenuity, made a very brief flight on the red planet, approximately 178 million miles from Earth. In a flight lasting about 30 seconds, the tandem-rotor aircraft lifted to a height of about 10 feet, then turned to take a picture of the Perseverance Rover before settling back onto Martian soil. With Ingenuity's successful flight, the technology demonstrator mission could lead to larger aircraft and more robust missions.

“We offer our sincerest congratulations to the teams at NASA and the Jet Propulsion Laboratory (JPL) for accomplishing this unworldly feat,” says James Viola, president and CEO of HAI. “Those men and women have not only slipped the surly bonds of Earth, they have also reached across the heavens and accomplished a stunning milestone in engineering and flight.

Flying an aircraft in the thin Martian atmosphere is the equivalent of flying at roughly 100,000 feet above the Earth, something very few current aircraft of any kind can achieve. To generate the lift necessary for flight, engineers designed rotor blades, rotor heads and flight controls capable of spinning at 2,400 rpm or higher. Typical rotor speeds on Earth range from 225 to about 400 rpm.

Ingenuity deployed from the belly of the Mars 2020 Perseverance rover last week and had been undergoing tests to determine its ability to withstand the brutally cold Martian nights. Due to the substantial lag time for radio transmissions between Earth and Mars, the Mars Helicopter will operate autonomously, through programs downloaded to its computer and guidance systems. Flights are limited to very short durations and distances due a limited power supply.

“The technological advancements that made this flight successful will change how and where our terrestrial aircraft operate,” says Viola. “NASA and JPL have clearly demonstrated that the future of advanced air mobility is in rotorcraft. I cannot wait to see how our industry will adapt this amazing technology into their designs for aircraft and missions here on Earth.”