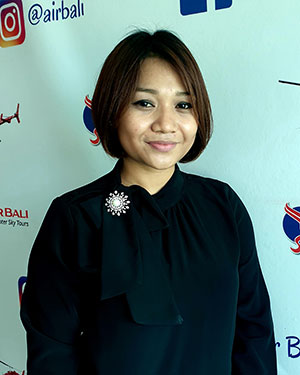 Helicopter Association International (HAI) announces that Krisna Dewi, commercial manager of PT Sayap Garuda Indah (Heli SGI and Air Bali) in Bali, Indonesia, is the 2020 recipient of the association’s Safety Award. The award, sponsored by BLR Aerospace, acknowledges outstanding contributions in the promotion of safety and safety awareness throughout the international helicopter community.

Dewi is receiving the Safety Award in recognition of her promotion of a business model that places safety above all other business elements, including profit. Her unwavering advocacy and determination to prioritize safety in the company’s operations has also resulted in increased business for her company during a period when Indonesia’s helicopter industry has experienced low or negative growth.

In 2014, at the height of the downturn in helicopter support for offshore drilling and amid uncertainty in Indonesia’s resource industry, Heli SGI was facing a shaky future. In a bid to turn things around, the company brought in an industry expert, Ronnie Fahy, to provide guidance. As part of the process, Fahy interviewed the company’s employees; Dewi stood out because of her vision and plan to move the company forward.

Dewi had witnessed other operators reducing expenses, including safety standards, in order to offer lower prices to customers. Her radical plan, considered brave at the time, mandated putting safety and quality above all else and charging accordingly. Her idea also included choosing to work only for clients who understood the business model and were willing to pay for a safety- and quality-first approach.

In an administrative role when Heli SGI’s reorganization began, Dewi was quickly promoted to commercial manager, the second-highest position in the company. As a woman with no aviation background in an industry dominated by experienced men, Dewi found she bore not only the responsibility of reviving the business but also the task of earning her colleagues’ respect. She accepted both challenges with determination, focusing on her goal to turn around Heli SGI by providing higher levels of safety and quality than its competitors.

To support her vision, Dewi, with the full support from Heli SGI board of directors, developed necessary safety and quality protocols. Some of the resulting projects initiated included:

Dewi began the process of reinvigorating Heli SGI by giving all prospective clients the same message: “Thank you for inviting us to talk. However, there’s one thing we need to make clear from the start: Heli SGI will not be the cheapest in your procurement process and will not enter into a bidding war. If that’s acceptable, let’s shake hands and begin moving forward.”

As might be expected, some potential clients ended the meeting there, and Dewi faced criticism; however, the return on Heli SG’s investment in safety is clear. When Dewi received her promotion in 2014, Heli SGI was operating on one contract flying 60 hours a month. Today, in part because of her work in the past five years, the company operates 12 helicopters on contract, flies 600 to 800 hours a month, and has several long-term contracts with large mining companies.

Dewi’s work has not gone unnoticed: other operators are now adopting the Heli SGI safety-first model. And while that means more competition, the end result is that not only has Dewi helped her company grow and become safer, she has helped Heli SGI make the industry become safer, too.

Dewi’s award will be presented at the Salute to Excellence Awards luncheon on Jan. 29 during HAI HELI-EXPO 2020. HAI HELI-EXPO, the world’s largest helicopter trade show and exhibition, will be held at the Anaheim Convention Center in Anaheim, CA, Jan. 27–30, with the exhibit hall open Jan. 28–30.