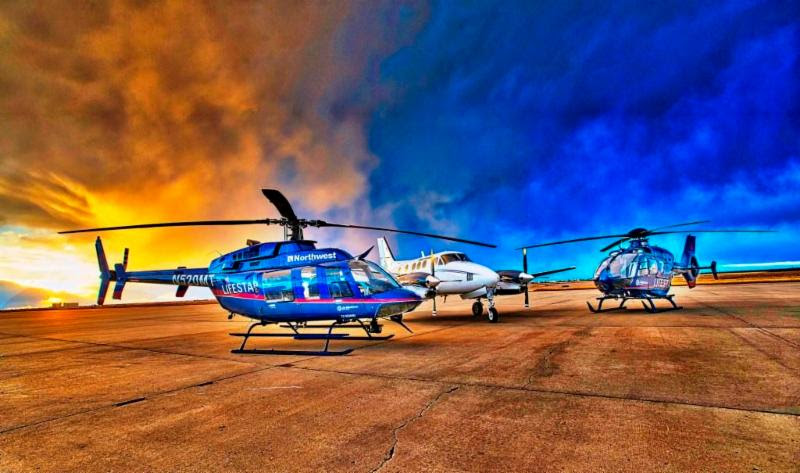 Med-Trans Corporation and Northwest Texas Healthcare Systems commemorate the 25th anniversary of LIFESTAR air medical transport service in the Texas Panhandle and surrounding states. Originating in one location with one helicopter, LIFESTAR now operates two helicopters and a fixed-wing aircraft from three locations.

"We are proud of the growth and service we've been able to provide in bringing world-class patient care to the people of the Texas Panhandle and nearby states," says Med-Trans president, Rob Hamilton. "To mark this historic 25th anniversary, we'll be hosting a gala celebration at the new Downtown Embassy Suites on Aug. 18 to share our celebration with the community."

Stewart Jackson, RN, BSN, CMTE and director of LIFESTAR, says he expects the event to include community leaders and prominent citizens. "We want to show off how proud we are to have the privilege of serving this excellent community," Jackson says.

He says he is hopeful that employees dating back to the earliest days will be able to attend the gala event.

Jackson notes that the company began flight operations in Amarillo in 1993 under the name Medevac 1. At that time the flight operation was run by a company called Southwest Helicopters, operating a single Eurocopter AS350 helicopter based at the Northwest Texas Healthcare Systems hospital in Amarillo. At the time, it was the only flight operation serving the medical airlift requirements of the Texas Panhandle.

Today LIFESTAR has grown into an operation with three aircraft operating from three bases and employing close to 100 people, including administrators, nurses, mechanics and flight dispatchers. One base is located at Northwest Texas Healthcare Systems hospital, while another is at the Rick Husband International Airport, which serves Amarillo. The third base is located in Pampa, TX, approximately 55 miles northeast of Amarillo. LIFESTAR bases and hangars its Eurocopter EC-135 helicopter at its hospital location.

A second helicopter, a Bell 407, is located in Pampa with the Emergency Services Foundation of Texas, the EMS provider there. LIFESTAR also operates a fixed-wing aircraft, a Beechcraft King Air C90, located at the Amarillo airport location.

Control and flight-following for all three aircraft is handled through LIFESTAR's dispatch center, located at Northwest Texas Healthcare Systems. All three flight operations' locations are accredited by the Commission on Accreditation of Medical Transport Systems (CAMTS), an independent, non-profit organization that audits and accredits fixed-wing, rotary-wing and surface medical transport services worldwide to an exacting set of industry-established criteria.

Med-Trans Corporation, which operates LIFESTAR's flight operations, is now in its 36th year in business. Med-Trans has grown into a leading national medical transport provider focused on establishing professional relationships with leading health systems, medical centers and EMS agencies. Med-Trans offers a broad range of solutions to help its partners achieve successful patient outcomes. With relationships in 26 states and operations from more than 90 base locations, more than 1,200 Med-Trans team members make a difference in the lives and communities they serve.