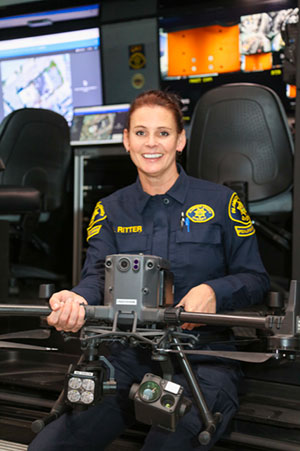 Helicopter Association International (HAI) announces Alameda County (California) Sheriff’s Office (ASCO) criminalist Penny Ritter is the recipient of the 2023 Salute to Excellence Law Enforcement Award. This award, sponsored by MD Helicopters, LLC, recognizes an individual or organization that has contributed to the promotion and advancement of rotorcraft in support of law enforcement activities.

A 14-year ACSO veteran, Ritter helped turn the agency’s fledgling small uncrewed aerial system (sUAS) program into an award-winning, nationally recognized initiative that supports not only the county’s work but also that of agencies across California and around the nation. Traditionally, Ritter utilized laser scanners to map scenes as part of her crime-lab work. Five years ago, ACSO’s crime-lab commander approached her with a challenge: The sUAS team of eight aircraft and five pilots had received a free trial license to Pix4D, a photogrammetry and drone mapping software. He asked if she would be interested in learning how to register the Pix4D data the drones captured to provide scene mapping.

“I said, ‘Sure, not a problem,’” Ritter recalls with a laugh. “I had no idea how to use the software and didn’t even know what a drone looked like. He gave me some of the data, and I went to YouTube to watch training videos and took a class. Then I started modeling crime scenes and making 2D and 3D maps for measurements.”

The maps proved extremely valuable and led to approvals to expand the team with more equipment and operators. Again, the commander tapped Ritter, this time to help lead the program. She learned to fly and maintain the different drones and earned her FAA Part 107 certificate to operate them. She built spreadsheets to track the equipment, maintenance, pilot licenses and training, equipment needs, operations and more, as well as developed relationships with drone manufacturers and other representatives in the sUAS field.

While ACSO is responsible for unincorporated areas of the county, its team often supports incorporated cities within Alameda County and beyond. Starting with the Tubbs Fire in October 2017, ACSO began utilizing its sUAS assets annually to assist with mapping disaster zones. Ritter’s team also mapped the Camp Fire, California’s deadliest and most destructive fire. For that job, Ritter helped lead a task force of 16 agencies that conducted 518 sUAS flights to collect 70,000 images over 17,000 acres to map the town of Paradise after the tragedy.

ACSO credits Ritter with helping locate and arrest countless dangerous individuals as well as documenting many critical scenes. She assists with dangerous crime scenes and crime scene reconstruction, such as that of the Hart family murders in Mendocino County in 2018. Ritter led the team that helped search for the victims of the murder–suicide, in which the family vehicle was driven off a 100-foot. cliff. The team mapped the crime scene, producing an orthomosaic map and 3D model used in the coroner’s inquest.

Today, the ACSO sUAS team includes 110 aircraft and 25 pilots. Ritter ensures that all aircraft are up and running, assisting with updates and repairs 24/7. She is also instrumental in helping several other agencies launch and expand their sUAS programs by offering her expertise and support. In return, many agencies support ACSO’s sUAS team in fire mapping.

“Penny is an exceptional asset to ACSO because of her leadership and her willingness to assist public safety agencies around the nation,” says ACSO captain, Paul Liskey. “Penny not only knows how to safely operate each aircraft ACSO deploys, but she continually offers her time and support to train other team members and local agencies.”

The Law Enforcement Award will be presented during HAI HELI-EXPO 2023, the world’s largest helicopter trade show and exhibition, to be held at the Georgia World Congress Center in Atlanta, GA, Mar. 6–9.