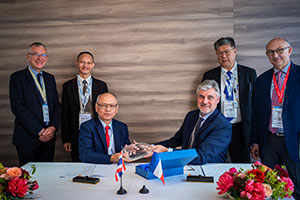 The new agreement enlarges the scope of support and services provided through the partnership. It covers more operators, like the Royal Thai Navy, and new engine models, such as the Arrius and the Arriel. It also optimizes the technical support provided by Safran to include inventory management and confirms TAI as national distributor of Safran spare parts.

The partnership with TAI, covering around 50 engines, is built around the Global Support Package (GSP) service model, which guarantees engine availability to military and parapublic operators. It is executed through the industrial capabilities of TAI, the main aircraft repair and maintenance service provider in Thailand. In partnership with Safran, TAI provides helicopter-engine line maintenance, depot repair, inventory management and technical support expertise to ensure engine availability to government operators.

Under the GSP, the customer receives a commitment to have serviceable engines available whenever they need them. Other GSP principles include budget stability, fixed price-per-engine flying hour and a technical partnership with the OEM.

The partnership is managed by Safran Helicopter Engines Asia, in Singapore, supporting more than 1,000 Safran helicopter engines in Southeast Asia and the Indian sub-continent.