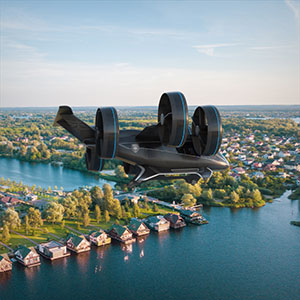 Safran is Proud to Power the Bell Nexus

The first application of the Safran Hybrid-Electric Propulsion System (HEPS), the Bell Nexus, is officially unveiled at the Consumer Electronics Show (CES) in Las Vegas. The propulsion solution of this multi-rotor vertical take-off and landing (VTOL) aircraft is capable of producing more than 600 kWe power. During ground tests last June the system produced 100 kWe. Further tests will be carried out next year.

“This partnership with Bell in the on-demand mobility sector is a strategic opportunity for Safran,” says Jean-Baptiste Jarin, Safran Helicopter Engines vice president, Hybrid Propulsion System Program. “Nexus is the first of a new breed of aircraft. It opens the doors to new markets and new missions. Fully commited to these challenges and sharing a common vision with Bell, we now look forward to seeing it fly.”

”Bell is excited to unveil the Bell Nexus at CES and to share this exciting time with our partners,” says Bell’s Scott Drennan, vice president of Innovation. “The Bell Nexus delivers a nexus of transport and technology, comfort and convenience. We look forward to continuing the development of technology with Safran to bring this nexus to life.”

HEPS works by distributing thermal and/or electrical energy, depending on the phase of flight, to multiple rotors. It comprises three sub-systems: electric generation that relies on a turbo-generator and batteries; electric power management; and the electric motors that generate lift and propulsion.

Hybrid-electric propulsion solutions being explored by Safran teams are the most efficient way to enable multi-rotor VTOL aircraft to meet future safety, emission and affordability standards.

By 2025, Safran is committed to becoming the market leader in HEPS technology.