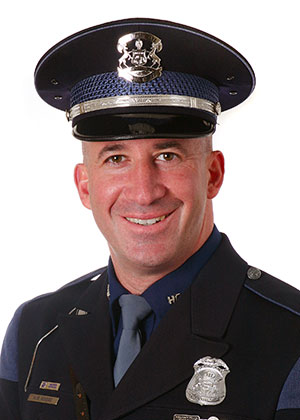 Helicopter Association International (HAI) announces that Michigan State Police Aviation Unit Sgt. Matt Rogers is the recipient of the Salute to Excellence Law Enforcement Award. This award, sponsored by MD Helicopters, recognizes an individual who has contributed to the promotion and advancement of helicopters in support of law enforcement activities.

Growing up, Matt Rogers dreamt of being a state trooper like his dad. As he got older, his interests turned to his grandfather’s profession — aviation. He earned his airplane private pilot license in high school and, after graduation, enrolled in Western Michigan University’s aviation technology program.

Yet, Rogers couldn’t shake his police-work dreams. So he left college and enrolled in Michigan State Police Recruit School in 1995. During the next 19 years, Rogers worked assignments including road patrol, narcotics, training academy, drive track, and desk sergeant. Then, in 2014, an opportunity came to blend his two passions.

That year, Rogers was selected to join the aviation unit as the police department’s first tactical flight officer (TFO). Until that time, the Michigan State Police (MSP) had operated its fleet of helicopters and airplanes with two pilots. In his new position, Rogers would help develop the MSP’s TFO program from the ground up. After attending the Los Angeles Police Department’s TFO school, he came back home to help establish an extensive curriculum to train all incoming MSP TFOs.

Rogers then focused on building the MSP’s UAS program. While the aviation unit had already purchased an Aeryon SkyRanger, the UAS program had yet to be created. Through the work of Rogers and his team, the MSP became the country’s first police department to receive a statewide certificate of authorization for UAS operations in uncontrolled airspace. He soon added to the authorization approvals for day and night operations in controlled airspace, including emergency exceptions into Class B airspace.

Again, Rogers built the program from the ground up, creating a framework that would not only ensure unit and personal growth but also create opportunities for a diverse UAS mission set. As the program grew, additional UAS platforms and personnel were added and missions were expanded from crime and crash-scene documentation to tactical overwatch and building searches.

“The big thing for our unit is being able to deploy the best tool for the job,” Rogers explains. “If someone calls for an aerial search, by having helicopters, airplanes and UASs in our unit, we can present the best tool for that specific mission. Having UASs in the aviation unit has been instrumental in providing that service. That isn’t something that’s necessarily done in other agencies.”

Rogers meticulously developed processes and procedures for the UAS program that exceeded all FAA and legal requirements while ensuring full privacy protection for the citizens the agency serves. He also became a founding member of the National Council on Public Safety UAS and held a governor-appointed position on Michigan’s Unmanned Aircraft Systems Task Force. Along with this work, he spoke at conferences and gave demonstrations to help other agencies use UASs effectively.

“Our team’s training sessions and seminars give us the chance to talk about policies and procedures, share what worked and what didn’t, and explain how to implement this new technology in a way that follows a person’s constitutional rights,” Rogers says. “We, as law enforcement, don’t want to create bad case law that could make manned aircraft police-work more difficult. I’m always eager to emphasize the importance of that.”

The Law Enforcement Award will be presented March 7 during HAI HELI-EXPO 2022, the world’s largest helicopter trade show and exhibition, held at the Kay Bailey Hutchison Convention Center in Dallas, TX, March 7–10. The exhibit hall will be open March 8–10.