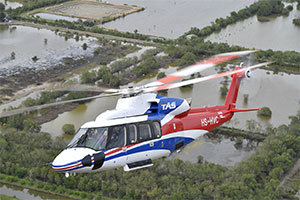 “We genuinely value the trust and confidence Thai Aviation Services has demonstrated in Sikorsky products over the past three decades,” says Audrey Brady, Sikorsky vice president of Commercial Systems & Services. “Sikorsky is extremely proud to provide TAS with safe, reliable aircraft to support such a high operational tempo with first-rate availability.”

Since 1977, Sikorsky has delivered more than 875 S-76 helicopters to customers around the world. The offshore oil-transportation mission accounts for 65 percent of the more than 7.25 million hours flown by the entire Sikorsky S-76 fleet. The S-76 line of helicopters is also well known for high reliability with VIP transportation and utility work, search and rescue operations, and helicopter air-ambulance transportation.

TAS is also forecasting that the flight of its 100,000th S-76D revenue passenger will occur later this fall.