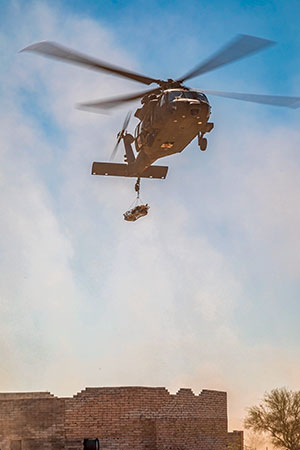 Vita Inclinata (Vita), developer and producer of helicopter and crane load stabilization and precision hardware, announces the U.S. Army recently procured 15 Vita Rescue Systems (VRS-LAs) to be evaluated for operational effectiveness and suitability. For approximately one and a half years, Vita has worked diligently with support from ADS to make the Vita Rescue System available on tailored logistics support (TLS) contracts.

Medical evacuation (MEDEVAC) and search-and-rescue (SAR) missions are often challenging for all teams involved — especially when rescue hoist load spinning is concerned. Unless specific measures are taken to counter the downwash from the helicopter onto the individuals attached to the hoist cable, there is a strong possibility that the load will begin to spin out of control. Precautions need to be taken to ensure the hoist cable doesn't rub or contact the aircraft, damaging individual strands of the hoist cable. This is in addition to the life-threatening situation the injured party is placed in. Unfortunately, the surface area is presented to the aircraft’s downwash by a rescue hoist load, which needs to be countered by something for the airflow to push against. The VRS provides these life-saving countermeasures to aircraft downwash.

Vita technology offers a completely new way to approach the high-risk mission of helicopter hoisting. The value proposition they discovered includes new efficiencies such as:

The VRS will be delivered to the U.S. Army Aeromedical Research Lab (USAARL), Fort Rucker, AL, for additional environmental testing followed by operational testing. In addition, various U.S. Army National Guard units and active duty Combat Aviation Brigades will review the VRS for operational user evaluation (OUE). This review phase will gather input on the VRS’s performance, evaluate improvements that can be made, and most importantly, seek to unlock new product capabilities.

While the focus of this testing is to discover technologies that improve the outcome of rescue missions, whether in combat or domestic operations (DomOps), it will also expose potential new applications and mission areas to the VRS technology. The combination of testing and soldier touchpoints through OUE continues the accelerated development and fielding process Vita and the U.S. Army have pursued to this point, allowing for early identification of soldier needs and rapid iteration of helicopter hoisting capabilities.

"Just three years ago, Vita was speaking about a concept, a concept that PD MEDEVAC now defines as a dual-use technology for potential adoption within the Department of Defense," says Caleb Carr, president and CEO, Vita. “Everyone at Vita has performed relentless work to bring this capability to reality. We applaud the U.S. Army for their foresight into exploring new and innovative, life-saving MEDEVAC and SAR technologies that will save the lives of Army warfighters!"