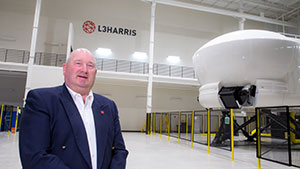 The USHST was formed in 2013 as a regional partner within the International Helicopter Safety Foundation (www.IHSF.aero) to lead the industry’s and government’s cooperative effort to promote safety and work to reduce fatal helicopter accidents.

In his role as Training Center general manager, Mayhew oversees a variety of rotary, fixed-wing and unmanned high-fidelity training devices, delivering flight training to both commercial and military customers. Prior to his position at L3Harris Technologies, Mayhew managed the Bristow Group Flight Academy in Titusville, FL. He is a 28-year veteran of the British Royal Navy, flying the Westland Sea King helicopter, earning the rank of lieutenant commander, and serving in both Persian Gulf wars. In 2017, the Helicopter Association International honored Mayhew as the Flight Instructor of the Year.

“Nick Mayhew has been a prominent member of the IHSF and the USHST for the past nine years,” says Wayne Fry, USHST government co-chairman and FAA Flight Standards division manager for General Aviation Safety Assurance. “He brings a wealth of experience to the co-chairman position and a track record of successful team leadership and motivation. He will hit the ground running as we continue our efforts to reduce fatal helicopter accidents here in the United States.”

The U.S. Helicopter Safety Team focuses on the U.S. commercial helicopter community and the elimination of fatal accidents through continuous safety education and targeted safety enhancements.