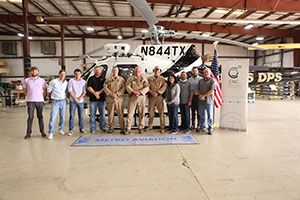 Working closely with CNC Technologies, Metro Aviation’s experienced team equipped Texas DPS’ newest aircraft with the latest Wescam 4 MX10 with multiple payloads and options, including the newest audio/video tracker (AVT); advanced video switching, controlling multiple separate cameras to include cabin, tail and hoist; advanced IP integration and multiple signal downlink, allowing the distribution of not just video but any and all metadata from the aircraft; and multiple DVRs to capture audio and video from the aircraft’s numerous sources. The system has the ability to feed multiple video and data signals to all monitors and the existing Texas DPS ground-receive infrastructure.

In addition, the aircraft features advanced mapping integrated with multiple mission system functions, such as Garmin navigation and the Axnes wireless intercom system, which makes communication from air to ground efficient and effective. Metro worked with Texas DPS to install multiple audio stations, which include a special water-resistant panel specific to hoist operations, as well as a belly-mounted hoist floodlight.

“We have enjoyed a strong partnership with Texas DPS and have completed multiple aircraft for their agency,” says Metro’s aircraft configuration coordinator, Amy McMullen. “The capabilities of this new H125 are beyond anything we’ve done, and we’re thankful for their ongoing business and confidence in Metro Aviation and our team.”

Although Metro Aviation has completed numerous aircraft, N844TX is the most advanced law-enforcement aerial mission platform completed to date, giving Texas DPS a cutting-edge advantage for completing their public-safety missions.

Expanding upon their longtime partnership, Metro was also awarded the Texas DPS contract to perform scheduled and non-scheduled maintenance of all aircraft systems in accordance with the respective aircraft maintenance manuals and the Federal Aviation Administration (FAA).  Maintenance will include airframe, engine, mission equipment, and all other aircraft components of all series of A-Star AS350, H125 and EC145 helicopters for the Aircraft Operations division.