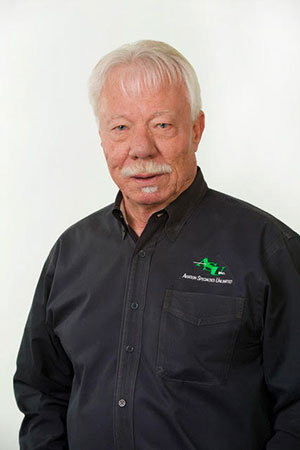 Aviation Specialties Unlimited, Inc. (ASU) announces that ASU founder and CEO, Mike Atwood, has been inducted into the Association of United States Night Vision Manufacturers (ANVM) Hall of Fame, established in 1995 to honor those individuals who have made a major contribution to night-vision technology.

“I have known Mike Atwood for years, and he is very deserving of this recognition,” says ASU president, Dr. Joseph Estrera. “Mike transformed an entire industry to the use of night-vision goggles and made civilian aviation use of night-vision goggles a reality. Without him, countless lives would not have been saved. He has helped shape not only the safety of the United States but also countless countries around the world because of his pioneering efforts.”

Atwood founded ASU in 1995 with the singular intent to get NVGs cleared for use in civilian EMS operations. Since its founding, ASU has put more than 5,000 NVGs into EMS operations worldwide and has modified aircraft lighting in nearly 1,500 individual aircraft in order to ensure safe flight when using NVGs. Since ASU set out to be a full-service supplier to the EMS community, the company also has provided training to more than 6,000 pilots and crew members. All of this effort resulted in the U.S. Federal Aviation Administration first authorizing NVGs for use by EMS personnel in 1999. Since then, the equipment and training provided by ASU has delivered enormous benefits for citizens around the world. Based on data from the Association of Air Medical Services and international Helicopter Emergency Medical Services organizations, an estimated four million life-saving EMS flights have occurred in the 22 years since night EMS flying first started.

“This award is less about me and should be more about the team at ASU,” says Atwood. “We set out with a mission to help make flying at night safer. More than 27 years later we are still accomplishing this mission. I want to thank everyone at ASU and the ANVM for this recognition. It means a lot to me to know that others recognize why I started ASU and, more importantly, recognize the good work that we have done continues to make an impact.”

Atwood has spent his 43-year career in the night-vision industry, split between the U.S. Army, the Idaho National Guard, the Idaho National Laboratory and ASU. His time with the Army included accumulating more than 1,000 hours flying with NVGs, starting with the first goggle ever approved for flight, the AN/PVS-5 Cut-Away. He later advanced to the AN/AVS-6 Aviators Night Vision Imaging System (ANVIS) and its complementary accessory, the AN/AVS-7 ANVIS Heads-Up Display. He also served as an instructor pilot for the AH-64 Apache Attack Helicopter. Following active Army service, he was a pilot with the Idaho National Guard. He retired in 2000 with the rank of chief warrant officer 4.

Atwood was also a 37-year member of the Helicopter Association International and served on its Government Services and Safety Committee as the night-vision subject-matter expert. He and ASU have also made contributions to military night vision. In 2014, he approached both manufacturers of image intensifier tubes and recommended the phosphor they contain be changed from green to white. This was a revolutionary idea but has proven to be extremely beneficial, as image clarity and brightness are much improved. Nearly all military pilots are now flying with white-phosphor image tubes. ASU has also delivered 23,000 NVGs (both aviation and ground) to military customers around the world.

While Atwood stepped down from active involvement in ASU’s operations in 2021, he continues in a limited advisory role when requested.

Atwood also was recognized in 2012 with the Salute to Excellence Lifetime Achievement presented by the Helicopter Association International.