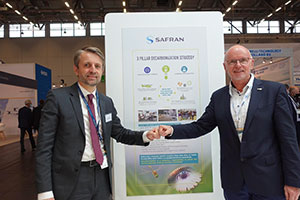 The goal is that, by summer 2022, one HEMS helicopter will be ready to use 30 to 50% biofuel, in compliance with current Safran engines' certification to use up to 50% SAF. Later, depending on the R&D results, the operator plans to introduce SAF at all its bases. In a second phase, the partners will look at using 100% SAF, as well as innovative fuels such as e-fuels.

ÖAMTC Air Rescue CEO, Marco Trefanitz, says, “We are pleased to collaborate with Safran Helicopter Engines on introducing SAF and, in particular, to be the first to use it on a Arrius 2B2-powered fleet. SAF are key to reducing the carbon footprint of our fleet. Our long experience with the engine and the certified technicians at our maintenance center, Helikopter Air Transport GmbH (HeliAir), will support this R&D activity. Another key factor will be the economics; right now the production of SAF is very costly and prices are high for the end user.”

Safran Helicopter Engines CEO, Franck Saudo, says, “This partnership is another important step in contributing to the development of SAF. We are particularly pleased to collaborate with ÖAMTC in introducing biofuel on an Arrius-powered fleet. The use of sustainable fuels by operators and at our sites contributes to reducing CO2 emissions over the entire life cycle of our products."

The first flight of an ÖAMTC helicopter with SAF is planned for next year. Pilot and managing director, Reinhard Kraxner, adds, "Sustainability is one of the most important topics of our time. Especially for us — with public health as our core task. That's why we are already planning for tomorrow by successively renewing our fleet and, at the same time, working with our partners on the widespread use of sustainable fuels."

Safran is committed to assisting operators transition to SAF. Its engines are already certified to operate on up to 50% of the fuels. Last September, Safran conducted a ground test campaign of a Safran Makila 2 engine using 100% biofuel. Recently, an Airbus H225 flew with a Makila 2 engine powered with 100% biofuel. The use of 100% SAF enables the reduction of CO2 emissions by up to 80%. In parallel, and in order to reduce the carbon dioxide emissions at its production facilities, Safran has deployed the fuels at its own engine test facilities, starting at a rate of 10% and increasing to 50% by 2025.

With Helikopter Air Transport (HeliAir), the ÖAMTC Air Rescue Service operates its very own maintenance facility with European aviation legislation approval at its bases in Innsbruck and Wiener Neustadt, servicing helicopters and engines from all over Europe. HeliAir also operates its own design and production facility, developing mission equipment for helicopters and compiling all the approval documents required by the European Aviation Authority.